Any Breakout Is Likely To Be Short Lived. Sell Out Of The Money Call Spreads!

Seasonality has taken over and the market is creeping higher on light volume. The news was mixed last week with positive and negative releases. The last three days, the market has gapped higher and it has closed near its opening price. That is depicted by the long tails and tiny bodies in the candlestick chart below.

This morning, we had a spattering of good news. Dubai World received a $10 billion loan from Abu Dhabi and this was largely expected. Asian markets rallied on the news. Citigroup is issuing $17 billion worth of stock and it is using the proceeds to repay $20 billion in bailout money. This was also largely expected and rumors were circulating last week. The good news is that banks have been able to raise equity. Personally, I feel they are rushing to do so knowing that conditions could deteriorate quickly if we have a “double-dip” recession.

The government could make a profit of $14 billion from the Citigroup bailout and we can certainly use the money. Politicians are quick to point to their successes, but the strongest banks have been the ones that have repaid. The most questionable loans are still outstanding and they may never get paid back.

This morning, Mobile announced that they are buying XTO. “Merger Monday” has produced another takeover and that has also been positive for the market.

The market has hit resistance and each time it has tried to break through this level, profit-taking has set in. I’m sure that some speculators are picking a top and we could see a small round of short covering if we break out. However, I feel bears are not aggressively shorting this market after having their heads handed to them the last eight months. The VIX has been declining and that tells me that put buying is minimal. The selling that we have seen is profit-taking, not speculation.

Asset Managers are taking some chips off of the table. Whenever we get a good rally, they are selling into the strength. Normally, we would see a year-end rally. This selling pressure is keeping a lid on the market and I believe it will intensify as the end of the year draws closer.

This week, PPI, Empire Manufacturing, industrial production, housing starts, CPI, initial claims, LEI and Philly Fed will be released. Inflation should be tame, manufacturing will be weaker than expected and housing starts will improve. The market will have small temporary reactions to the news. The FOMC will release its decision on Wednesday and we can expect “easy money” statements. In total, the news should produce a small positive reaction.

I sense that sellers are anxious to take profits and if we do get a breakout, it will be short-lived. I am selling out of the money call credit spreads into year end. Look for stocks that have firm resistance and have been weak relative to the market. We could see profit-taking in some of the big winners since capital gains taxes will go up in 2010. If you own stocks that have made a big run, you should take some chips off the table.

Expect quiet trading with a slightly positive bias. This is a quadruple witch and we are likely to see choppy trading activity. Keep your size small as we wait for the market to make a move above SPY 112 or below SPY 108. 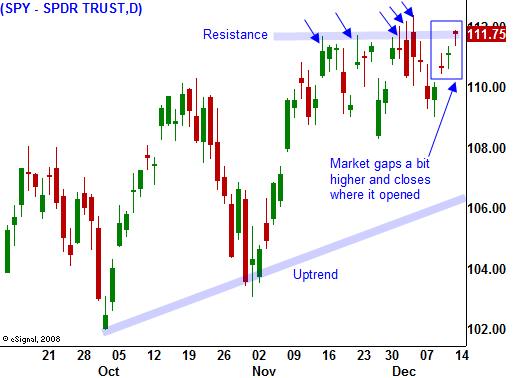