Look For Resistance To Hold With Afternoon Selling!

There is an old market adage, “never short a quiet market”. That has certainly been the case during the last week of trading. The market has opened higher and it has been flat for the rest of the day. Yesterday, we had the seventh consecutive Monday that posted a gain. “Merger Monday” featured the purchase of XTO Energy by Exxon. Banks have been busy raising capital and Citigroup attracted $17 billion. This was widely expected and they will use the proceeds to pay off TARP.

Dubai World received $10 billion in funding from Abu Dhabi yesterday. That was also widely expected. This morning, Wells Fargo raised enough money to pay off $25 billion in bailout loans. The good news is that capital is available and banks can separate themselves from “big brother”. The bad news is that shares are greatly diluted and I believe banks know that tough conditions lie ahead. They are racing to raise money before the window of opportunity closes.

We are far from out of the woods. The EU is greatly indebted and the PIIGS (Portugal, Ireland, Italy, Greece and Spain) are extremely weak. Last week, Greece had its credit rating lowered and Spain was placed on notice. This morning, we learned that Austria nationalized a major bank and warned that another major bank might fail. This is a major EU member and it reminds us that problems in smaller areas can lead to big problems. Exposure in Eastern Europe could spread to the rest of Europe. Conditions are deteriorating during a supposed global recovery.

The Empire Manufacturing Index was released this morning and it was horrible. It fell to 2.5 when analysts had been expecting 23.5. Fortunately, industrial production improved slightly and it climbed .8% when analysts had forecasted a .5% gain. These two numbers offset each other. Producer prices rose by a whopping 1.2%, much higher than the .2% economists had expected. The plunging dollar is starting to impact prices and higher inflation will ultimately translate into higher interest rates.

The government is still raising money and the cost of capital will rise. I have heard estimates that an uptick in interest rates could spike our interest payments up to $500 billion per year on our national debt. I shudder to think about the alternative uses for that money. Our debt continues to grow and politicians on both sides of the aisle are concerned.

The economic recovery is fragile and higher interest rates could strangle growth. The government has fired all of its bullets and I doubt another stimulus plan will get passed. Now we will see if organic growth exists. Americans are tapped out and I don’t believe they will revert to their reckless spending habits.

Consequently, I believe that major resistance at this level will hold. Stocks were priced for disaster in March and now they are priced for perfection. The real estate bubble was not created in the course of a year and it will not be solved in a year. Core problems run deep and we are not alone. Europe and Japan have similar issues. Between us, these nations control most of the global wealth. Without us, emerging markets don’t stand a chance.

As you can tell, my sentiment is shifting from bullish to bearish. I don’t want to pick a top so I will keep my distance and I will sell out of the money call credit spreads. If the market breaks out to the upside, I will buy back my spreads. Chances are the losses if any will be minimal since I am distancing myself from the action. When the market breaks below key technical support levels (SPY107) I will get more aggressive with my shorts. The move can come very quickly and you should have your bearish list ready.

I am somewhat surprised at how well the market has held up today. The capital raised by banks has been a real boost, but to a large degree it was expected. Apparently, no one thought it would be this easy to attract investors. The news from Europe is very concerning and weakness in the smaller countries could have a domino effect. Unlike the US, the EU is loosely unified and it will be much more difficult to contain financial failures.

We are up against major resistance and I believe we will see profit-taking as the day unfolds. The CPI could raise fear and it will be released tomorrow. The FOMC will release its statement tomorrow afternoon and it will stand pat on interest rates. They believe inflation might move lower so it will be interesting to hear their reaction to the PPI/CPI. Look for weakness into the close. 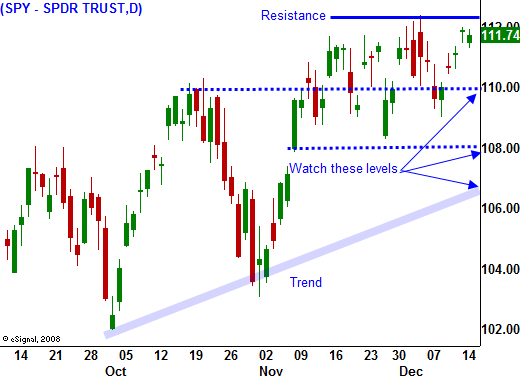