The market is in a funk. A range has been established (SPY 108 – 112) and it is randomly moving from one extreme to the other. There is no pace to the trading and overnight gaps are common. As you can see in today’s chart, the market has closed very near its open the last two days. The candlesticks have long tails and a tiny little body.

The market has been able to overcome credit worries in Dubai, Spain and Greece this week. It was also able to fend off selling after a weak initial jobless claims number and a dismal 30 year bond auction yesterday.

The market tried to rally early, but sellers stepped in. There is a light volume tug-of-war being waged. Wall Street wants to prop up prices so that year-end bonuses are hefty. At the same time, traders are taking profits after a 65% rally from the March low. For the time being, these two forces are offsetting each other. When the market dips, institutions fortify the bid. When the market gets ahead of itself and tests the upper limits, profit-taking sets in.

Normally, you would expect to see the market rally into year-end. However, seasonal patterns have not worked this year. If you “sold in May and went away” you missed a huge rally. If you took profits in August/September to avoid the weakest months of the year, you missed a nice rally. If you bought stocks in the middle of October (the most bullish part of the year) you are breaking even. Consequently, I don’t believe we will see a Santa Claus rally.

The headwinds are blowing and even after a great Unemployment Report last Friday, the market was not able to make a new high for 2009. As 2010 approaches, the risk will increase and traders will more aggressively take profits. Higher interest rates, renewed credit risks and flat economic performance are likely. The massive deficits will need to be addressed and taxes will go up across the board. Higher capital gains taxes in 2010 could create selling pressure into year-end. The government has fired all of its bullets and we will see if organic growth exists. These risks are real and if you believe (as I do) that the market has another 3% of upside, you will shift your investments into bonds.

Last month, investors shifted a lot of their money out of equities and into fixed income. If that trend continues, you will see profit-taking accelerate in the next two weeks.

The last few days have been like Chinese water torture for shorts. The market has been flat all day and then a small rally on light volume appears near the bell. The next morning, the futures are up a couple of points and the pattern repeats itself. Even a small bid in light volume can lift prices. It is important to preserve capital and these stealth rallies can be damaging.

We are right up against resistance. After an initial pop this morning, sellers have slapped the market right back down. As long as we close below SPY 112, I will hang on to my long put positions. If we break out to a new high, I will take my lumps and wait for a better entry point.

I believe the next big market move will be down. I will temper my bearishness as long as we stay above SPY 108. Once that level fails, I will aggressively look for shorts.

I like the selling pressure this morning after positive news releases. The A/D has deteriorated this morning. Advancers outnumbered decliners by 2 to 1 this morning. Now that ratio is 3 to 2. “Merger Monday” has typically kept bears at bay heading into the weekend. Overseas markets have performed well heading into the new week and this has provided a nice springboard for our market on Monday mornings. These two factors will keep shorts in check, but they might not matter to profit takers. These sellers simply want to lock-in returns and reduce risk. A sustained decline today could be very bearish. Watch the price action into the close. If we sell off, consider buying puts. 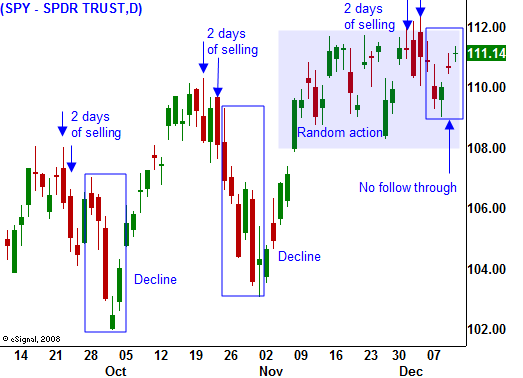