Traders Sell The News – Earnings Were Good But Intel and Chase Are Down!

The market broke out to a new relative high early Monday morning and the buying dried up quickly. By the end of the day, gains had slipped away and profit-taking set in. Tuesday, we had a nice decline and it looked like we might see a reversal off the new high. All we needed was some follow-through selling on Wednesday to push prices lower. After testing the downside early in the morning, buyers stepped right back in. These tiny little dips with quick snap back rallies indicate that the bid is still strong.

This morning, the market is a little soft after great earnings from Intel and J.P. Morgan Chase. Intel blew revenue and earnings away, but traders are “selling the news”. This release should bode well for tech stocks. J.P. Morgan Chase also posted huge numbers. Investment banking greatly offset credit losses. Both stocks surged last quarter and they pushed the market higher after they released. Great earnings are priced in to this market and next week we will see if there is more room to run.

Yesterday’s initial jobless claims number was a bit weak. It came in lower than expected and if this trend continues, jobs could be an issue heading into the next Unemployment Report. One disappointing report can be discounted, but two in a row will weigh on the market. It’s too early for us to jump to this conclusion; we just need to watch the initial claims on a week to week basis.

The CPI rose .1% and that was in line with expectations. For the time being, inflation concerns should ease. Next week we will see if higher commodity prices force the PPI upward. Empire Manufacturing came in much better than expected and activity in the Northeast is improving. The economic numbers are fairly light next week and the focus will be on earnings.

There won’t be any earnings announcements on Monday because the market is closed. Tuesday, Citigroup, Parker Hannifin, CSX and IBM release. After that, announcements will crank up quickly.

The news was pretty good this morning and given that Monday’s have been so strong, I thought the market would hold up better than it is this morning. I still feel that great earnings will be tough to ignore and I still expect the market to hold up well for another week or two. SPY 113.50 and SPY 112 still my put buying trigger points.

I am very comfortable sitting in the sidelines while I wait for a breakdown. 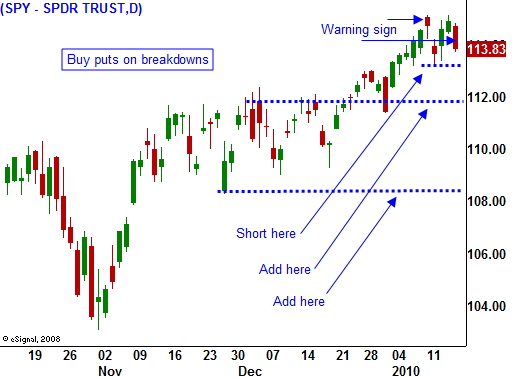