The Bid Is Strong and the Market Is Not Ready to Turn – Yet!

The market has been very resilient and the upside momentum is building. After one brief selloff, prices rebounded sharply. A close below SPY $113.50 could have sparked additional selling yesterday, but bulls quickly stepped in and the market recovered most of its losses from Tuesday.

Last Friday, the Unemployment Report was much weaker than analysts had expected. Most revised their forecasts upwards right into the release and job growth was expected. In December, we lost 85,000 jobs. That miss should have shaken the market, but it did not. Conveniently, 600,000 jobs were swept under the carpet and these workers have supposedly given up hope. Had those figures been included, the results would have been much worse. Traders have been able to downplay the number feeling that it was a fluke. This morning, initial jobless claims increased to 444,000. Consensus estimates were for 437,000 and again, the market was able to shrug off the news.

Retail sales dropped .3% when analysts had expected a rise of .5%. That is a fairly large miss and it shows that consumers are not opening up their wallets. Perhaps the most interesting number of the week will be released tomorrow. Commodity prices have rocketed and that should impact the CPI. Last month it rose .4% and it was much hotter than expected. Rising inflation would put upward pressure on interest rates and the market would have a negative reaction if prices rise for a second straight month. Consensus estimates are for a .1% increase. Industrial production and consumer sentiment will also be released tomorrow. A drop in consumer sentiment would be negative since 70% of our economy is driven by consumption.

Two major earnings announcements lie ahead. Intel will release after the close. Expectations are high and analysts have seen improvement in computer sales. The stock is trading at its 52-week high and it will be interesting to see if the good news is already “baked in”. This release will set the tone for the entire tech sector and we will see if there is more gas in the tank. Last quarter, INTC rocketed after the news and then pulled back for weeks. J.P. Morgan Chase will release earnings before the open tomorrow. This is one of the strongest banks in the country and I am expecting good results. Financial stocks have lagged the market and there is room for a rally. Most of the major banks will release earnings next week and they could fuel the final leg of this rally. The spread between borrowing rates and lending rates has never been better and year-over-year profits will be up dramatically. Financial stocks have been resurrected.

Tech stocks and cyclical stocks have run up dramatically and there is plenty of room for disappointment. Oil demand is flat and energy stocks are also likely to pull back after a good run. Last quarter, we saw the market run-up ahead of earnings and it continued to rally as banks released. Then the market stalled and stocks were selling off after they announced. I feel this same pattern will materialize this quarter.

Banks are not lending because they still see a lot of risk. They know the toxic assets they have on their books and they know a double dip recession could spell disaster. If conditions were improving quickly, they would be lending money like mad. Businesses are also cautious and they are not rehiring until they see an uptick in demand. Small business sentiment (50% of all employment) dropped for a second straight month. State governments will be cutting workers as they try to balance budgets and the government’s stimulus will soon run its course. That means our economy will have to sprout legs of its own. A warning shot was fired last year and consumers are not going to return to their reckless spending patterns. Consequently, I believe economic conditions will stall and the market will pull back in February or March. The bullish sentiment is strong and it will take a series of bad numbers to turn this market.

From a trading standpoint, if you’re nimble, you can trade the upside for another week or two. Do not overstayed your welcome and have tight stops in place. I am patiently waiting on the sidelines and I will be buying puts on stocks that break technical support. These positions will be longer-term in nature and I will scale in. I don’t know exactly when the market will crack, so I need to buy April, May and June expiration months.

Optimism is running high and most analysts expect a full recovery. Listen to CNBC and you’ll see that 90% of their guests are bullish. Over 80% of all newsletter writers are also bullish. Last week call purchases were extremely high, hitting levels we haven’t seen in many months. The VIX is at the same level it was in September 2007 and fear has been replaced by greed. Low option implied volatilities mean that speculators are not buying puts and institutions are not buying them to hedge. These conditions can persist for a period of time, but they turn quickly.
I still believe the next big move will be to the downside, but I know that I am early. I have to temper my bearishness and be patient. While I wait, I will look for very short-term trading opportunities to the upside where I can be in and out. I will keep these trades very small knowing that longer term put purchases are my focus. 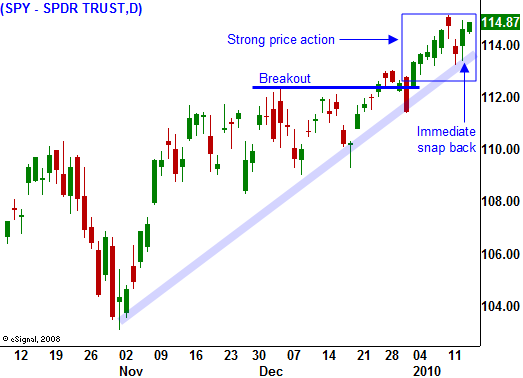