The Market Should Have Rocketed On The News – It Did Not. Selling Pressure Is Strong!

Before the open, the first estimate for Q4 GDP was released. Analysts were looking for 4.6% and the US economy grew by 5.7%. The S&P 500 instantly shot eight points higher on the news. Businesses are building inventories and they are starting to spend a little more (business spending up 2.9%). This was the strongest growth we’ve seen in more than six years. After the open, Chicago PMI rose to 61.5 when analysts were forecasting 57.4. A number above 50 indicates economic expansion.

Consumer confidence rose to a two-year high and the index hit 74.4 in January. Consumer spending accounts for 70% of our GDP growth and last it accounted for 1.4% of the 5.7% increase. The high unemployment rate will keep spending in check.

Ben Bernanke is back at the helm and that uncertainty has also been lifted. His reappointment should have been much easier than it was and the market is worried that Congress wants a bigger role.

Market conditions deteriorated quickly in the last two weeks and we were due for a bounce. As I explained yesterday, Mondays have been bullish and we have seen rallies for 12 consecutive weeks. End of month fund buying will support the market and we should see a rally that lasts a day or two.

Earnings have been good and Microsoft handily beat estimates. That has helped the tech sector a bit.

There are still major concerns in Europe and bond yields in weak countries are pricing in a hefty risk premium. The credit crisis is far from over. In most cases the risk has simply shifted from banks to governments. Governments have deeper pockets to shoulder the risk, but when they collapse the fallout is widespread. I have been saying for months that this is a big potential problem. We have major issues in the United States, but Europe is in even worse shape than we are.

Normally, after such a steep decline you would see some short covering. This rally today is on tenuous footing and sellers are taking advantage of any rally. Last year, each decline was viewed as a buying opportunity and the dips were brief and shallow. That is not the case this time around and I believe support at SPY 108 will be tested soon.

Look for support in next two days and be ready to buy puts. Commodity stocks and cyclical stocks are my favorite plays. China is putting on the brakes and the demand for commodities will ease. Furthermore, there is a flight to quality and the dollar has rallied. Hedge funds have been short the dollar and long commodities (dollar carry trade). As they unwind, commodity stocks will get nailed. Cyclical stocks and the industrials are also selling off after earnings. The guidance has been weak.

The market is transitioning and you need to sell the rallies once they stall. 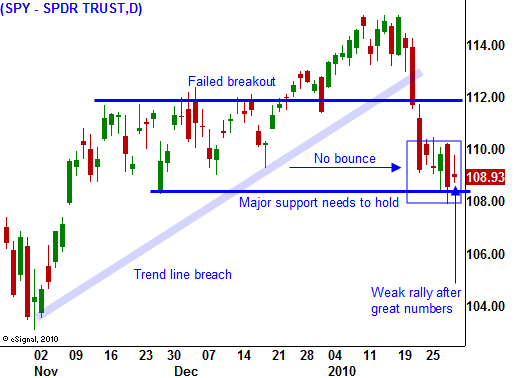