No Aid for Greece Would Be Bearish – Fed Exit Strategy Could Also Be Bearish!

In the last few weeks, Greece has gone from relative obscurity to center stage. This small EU member only accounts for 2% of Europe’s GDP, but it is a microcosm of the entire EU. It has spent beyond its means and enormous debt levels have investors scared. Greece is a socialist country and liberal spending will be tough to stop.

They have pledged to cut their deficit to less than 3% of GDP in the next few years. It is currently above 10% of GDP. Greek citizens don’t like the thought of layoffs, payroll cuts for government employees, or waiting an additional two years before they are eligible for retirement benefits. These are the tough decisions that have to be made and there will be pain. Workers are threatening to strike.

This same scenario holds true for many other countries in Europe. Spain is also on the ropes and their economy represents 13% of Europe’s GDP. You can add Portugal, Italy, Ireland, Latvia, Lithuania, Bulgaria and even the UK to the list. Thursday, the European Extraordinary Summit will meet in Brussels. Officials will be discussing aid to Greece.

The European treaty says that the EU is not responsible for obligations created by other central governments. This means that the EU could allow Greece to fail. Many believe that this would be the right course of action. If Greece is bailed out, they will continue their reckless spending habits without consequence. Other EU members would realize that they better get their fiscal house in order or risk failure. This would strengthen the euro currency.

This hard line approach would send a shock wave through the market. Other weak countries would fail as credit dries up. This domino effect is similar to what happened last year when Countrywide, Bear Stearns and Lehman failed. However, the fallout would be much greater because we are talking about nation’s not corporations.

There is a provision within the European treaty that the EU can step in to help a member during extraordinary circumstances beyond the country’s control. Most would argue that Greece has been fiscally irresponsible and they created their own problem. Nevertheless, the provision for aid is there if the EU wants to use it.

This course of action would allow us to pretend that everything will work out and the market will support the decision.

It is also possible that Germany makes a promise to backstop Greek loans. This would temporarily allow it to generate capital, but it would have to follow through on its massive cost-cutting measures. I don’t see this as a popular decision among German citizens. They won’t want to risk their own standard of living to support foreigners who are living beyond their means.

Any way you slice it, trouble lies ahead. The US is in a similar situation, but we are a little better off. If we continue our liberal spending habits and if we pass a national healthcare program, we will catch up to Europe in a year or two. For the time being, investors are fleeing to US Treasuries for safety and it has been easy for us to borrow money. This has given us a false sense of security and our market (relative to European markets) has been resilient.

Social Security, entitlement (welfare, Medicare, pensions) and defense spending account for 75% of our nation’s budget. In 10 years we won’t even be able to pay Social Security, entitlement and interest on our national debt. Major cuts have to be made and we need to raise the age for retirement benefits and scale them back over many years to avoid a major problem in the next few years. Unfortunately, no politician will get elected on that platform and we will spend our way into a financial collapse.

Just a year ago, the actions by the Fed and the Treasury were described as unprecedented. We kept hearing this description week after week as they threw the kitchen sink at our financial crisis. They tried things that had never been thought of before. By the time they were finished, there were no bullets left to fire. That’s how close we came to financial disaster. Don’t think for a minute that last year’s events were a fluke.

Corporations have been fiscally responsible and they have been able to generate nice profits. Unfortunately, our economic foundation is very weak and future profits will be hard to generate. Our government is tapped out and additional stimulus will only put us further in the hole. States are running deep deficits and according to the Constitution they must balance their budgets. Americans have little saved (average baby boomer has less than $100k saved for retirement) and one out of every three homes has negative equity.

The situation is dire, but it does not mean that the market will crash tomorrow. We could muddle around trying to spend our way out of this mess for a few years. It’s been going on for decades and the market could actually tread water for a while. When the big hurt comes it will make last year look like a cakewalk.

There is also the possibility that countries like Greece start to fail and that other countries can’t support them because they also have huge debt levels. If this crisis spreads quickly, the whole concept of printing money will come to a screeching halt. No one will want to lend money to governments that are spending beyond their means and have no way of repaying their debt.

Today’s comments are lengthy, but I thought I would paint a longer-term picture. The economic news is light this week and earning season is winding down. The Fed will outline its exit strategy for quantitative easing and that will be an important piece of information. The EU’s game plan for Greece will also drive the market. These two events will be much more important than economic releases.
Retail sales and initial jobless claims will be released tomorrow. I believe both numbers will be soft.

The market was not able to stage much of a bounce yesterday and it is trading lower today. Major snowstorms in the Midwest and on the East Coast have the financial centers buried. Trading desks are lightly staffed and the activity will be low. We are also heading into a three-day weekend and that will suppress trading volumes as well.

A quick fix solution for Greece might cause a temporary bounce from a deeply oversold condition. However, many other EU members will be lining up for bailouts in the coming months and this problem is far from over. The market is below major support at SPY 108. Maintain your shorts as long as this holds true. If we rally above SPY 108, get out of short positions and be ready to reestablish them once the bounce stalls. 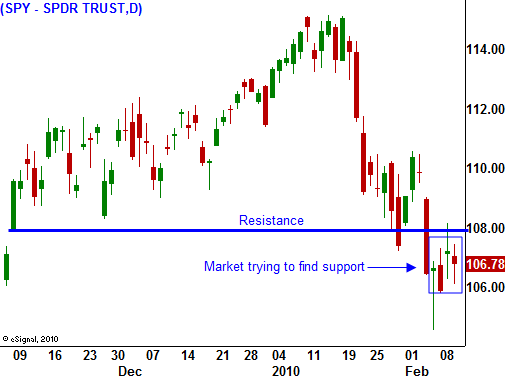