This week, the market has been able to tread water after a stretch of heavy selling. The technical damage has been done and a long-term uptrend has been violated, horizontal support has been breached and we are trading below the 100-day moving average. Last year, these pullbacks represented a buying opportunity and we saw aggressive buying on major intraday reversals. Those dips were briefed and the snap back rallies were furious.

The character of the market has changed and we did not get a snap back rally after last Friday’s reversal. Fear has resurfaced. Credit issues are looming again and this time, nations are at risk. The problems from a year ago have shifted from the private sector (financial institutions) to the public sector (governments). Central banks have the ability to print money and they typically have the deep pockets needed to ride out these storms. Liberal spending has created huge deficits and the governments themselves are perilously close to default.

Greece has received the most attention because many of their loans have to be rolled over. They mature this year and the country needs those funds. Given the massive debt levels, investors are demanding a very high rate of return because the risk of default is high. If Greece is not able to raise capital, it won’t be able to meet its obligations.

The EU has no obligation to back Greece. During an EU meeting in Brussels, member states stated that they would provide financial support. This is likely to come in the form of loan guarantees and the largest members (Germany, France) are likely to provide that backstop. These guarantees will have strings attached and we will find out the details next week. Greece must dramatically reduce its deficits. Government layoffs, pay cuts and retirement benefits are at stake. Labor unions are threatening to strike and this will all play out in the next few weeks.

Greece is not a major economic power. It only represents 2% of Europe’s GDP. The market is paying close attention to this situation because Greece is a microcosm of Europe. Many other nations are in a similar situation (Portugal, Ireland, Italy, Spain, Bulgaria, Latvia, Lithuania and even England). Enormous debts have resulted from liberal social programs (national healthcare, pensions, welfare) and many governments have been spending beyond their means for decades. A year ago, they were not in a financial position to spend billions of dollars on bailouts and stimulus programs – but they did. Now, they are dangerously close to the breaking point.

The situation in Greece might be resolved in the next two weeks, but the next problem is just around the corner. Last week, Portugal tried to raise $1 billion in a one-year auction and they had to cancel it due to low demand. When a country can’t even auction short-term maturities, it is in dire straits. Spain’s unemployment rate is 19.5% and their debt has been downgraded. It represents 13% of Europe’s GDP. All countries are struggling with their own deficits and they can’t jeopardize their own well being to help other nations.

We face the same problem in the United States, but we are slightly better off. If a national healthcare program is passed, we will quickly catch up to Europe.

As these credit concerns escalate, banks will be evaluating each other (counter party risk). Many financial institutions have risk exposure in Europe and interbank activity could lock up just as it did last year.

Earnings season is winding down and the results have been good. However, stocks were priced for a full economic recovery guidance has been a disappointment.

Economic news has been decent, but these statistics are backwards looking. Corporations see storm clouds on the horizon and they have been reluctant to hire new employees. Last week, Challenger, Grey & Christmas reported that more employers plan lay-offs. This is the first increase since July 2009. Capital expenditures have also been weak and corporations are not reinvesting in plant and equipment.

The government’s stimulus has run its course and the market will be waiting for signs of organic growth. While we wait, credit issues overseas will weigh on the market.

There is a chance that short-term solutions will provide a Band-Aid for the credit crisis and the market will rebound. However, these problems run deep and any rally is likely to be short-lived. Massive debt levels will haunt global markets for years to come.

The economic and earnings news next week will take a backseat to the EU’s decision on how to help Greece. The manner in which they do so will reveal their level of commitment and it will lay the groundwork for other weak members that might be seeking aid. If this looks like a half-hearted effort, the market will decline. Option expiration could fuel the drop as put open interest is climbing. As long as the SPY is below 108 – stay short. If the market rallies above SPY 108, exit short positions and re-establish them once the bounce stalls. 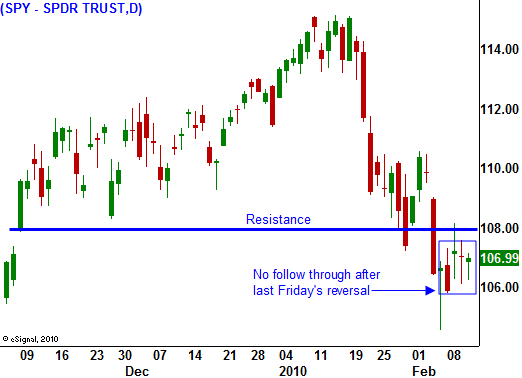