Europe’s GDP Was Flat In Q4 – The Pressure Will Mount – Stay Short!

Yesterday, the market had a light volume snapback rally. Heavy snow across the Midwest and East Coast resulted in lightly staffed trading desks this week and the volume has dropped off.

The news yesterday was not particularly good and the move was simply an oversold bounce. Once the buying momentum took hold, sellers stepped aside. This morning, the S&P futures are down 15 points on the open.

China raised its bank reserve requirements to head off a runaway economy for the second time this year. In January, they mandated that banks stop originating new loans the last two weeks of the month. Drastic actions were taken to curb lending. Global hopes of an economic recovery are tied to China and a slowdown there will have a ripple effect.

The EU said that they will provide support to Greece, but they did not outline the terms. Without question, Greece will have to demonstrate that it is taking the necessary steps to balance its budget. The government plans to lay off workers, cut wages and reduce retirement benefits. The labor union is ready to strike and tension will build.

Today, we learned that German GDP was flat in Q4. In fact, the entire Euro zone showed no growth. Investors are already worried about growing deficits and the credit worthiness of many EU members. Low economic activity means tax receipts will fall and welfare payments to the unemployed will grow. Even if Greece gets aid, the next problem is right around the corner.

As I mentioned yesterday, our economic releases are significant, but they are taking a back seat to what’s happening in Europe. This morning, retail sales were better than expected and they rose .5%. Unfortunately, this means little when a global credit crisis looms.

Debt levels around the world are very high and the “silver bullets” were all fired last year. Governments are tapped out and they simply don’t have the coffers needed to offer financial assistance. Even within the US, fears are growing as our national debt spirals out of control. New stimulus plans will not gain the widespread acceptance they did last year. Yesterday, our 30-year bond auction went horribly and perhaps the demand for our debt is drying up.

Corporations see the storm clouds and they are not reinvesting. They want to see an uptick in demand before they hire new employees and make capital expenditures. Consumers are tapped out. Those who have worked are trying to pay down debt.

Banks are turning a profit because the Fed through quantitative easing has kept interest rates low. Unfortunately, the phrase “toxic assets” has been forgotten. Banks are still burdened with devalued assets and “mark to model” rule changes make it possible for them to sit on this junk. They don’t want to take the write-downs and they know a “double-dip” would further depreciate these assets.

The market has taken away all of yesterday’s gains and it feels very heavy. The big intraday reversal one week ago did not produce the typical snapback rally. We are below support at SPY 108 and you should stay short. The uptrend line from last March has been breached and we are below the 100-day moving average. From both a technical and fundamental standpoint, the market looks weak.

It is possible that we will see bounces (short covering) over the next few months, but those rallies will be short-lived. Take profits on the big declines and take new short positions once the rallies stall. Financials and commodity stocks look like solid shorts.

We should see selling into a three-day weekend, but don’t go overboard. The first trading day of the week has been bullish and there’s a good chance the market will open higher on Tuesday. Option expiration could have a negative influence since put open interest is high. Stay short, but don’t overdo it in this “newsy” environment. 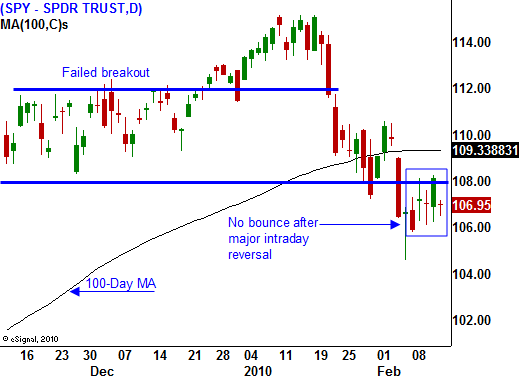