Cover Shorts But Don’t Get Sucked Into This Rally – The Next Big Move Is Down!

The first trading day of the week continues to be strong. Over the last four months it has consistently opened higher. Today, decent earnings and a little M&A activity helped to boost the market.

The situation in Greece has not improved and laborers plan to strike. Meanwhile, the EU has taken a hard line approach and Greece has until May 15 to prove that it is serious about balancing its budget. If Greece cannot materially cut spending, financial support will be withdrawn. Germany is in the best position to help and citizens are not enthused about bailing out a country that has spent beyond its means. Imagine how they will feel when Portugal, Spain, Italy, Bulgaria, Latvia, Lithuania and Ireland come knocking.

The market senses trouble and traders know that these problems are likely to grow. Last week, our 30-year bond auction went horribly. No one wants to lend our government money for three decades at a ridiculously low rate of return. The average yield to maturity on our bonds is four years and our national debt will continually need to be refinanced. Like Europe, our deficits are growing at an alarming rate.

Americans are concerned and they are finally getting the message. Social Security, entitlement and defense spending will bring us to our knees in the next 5 to 10 years if we don’t dramatically change the programs. A national healthcare program would break the bank. Americans are not stupid enough to think that a national healthcare program will actually save money and they don’t want it. The government can’t even provide decent healthcare for our bravest – what a disgrace. Imagine a nationwide VA.

Over the weekend, Sen. Bayh (Indiana) announced that he is not running for reelection. He stated that in a time of need, Congress is spinning its wheels. Bipartisanship has polarized our government and they can’t get anything done. His chances of holding the seat were great and this is a major blow to Democrats. The frustration continues to grow across the nation and Obama’s popularity is fading. You know it’s getting ugly when there is dissension within your own party.

The credit problems in Europe are similar to the problems in the US. If we are going to balance our budget and avoid catastrophe in the next 5 to 10 years, major cutbacks will have to take place. The eligibility for Social Security will have to be rolled back and benefits will have to be cut. That will not be enough. We will also have to massively increase payroll taxes to fund the deficiency. That will reduce discretionary income and greatly impact consumption. These decisions won’t be popular and there will be major unrest. That is why everyone is watching Greece very closely. It is a preview of what’s to come.

Earnings have been good, but the guidance could be stronger. Corporations see trouble ahead and they are not hiring. For the time being, they are staffing with temporary help.

Interest rates are low and they should continue to stay low in the near future. Wednesday, we will get the FOMC minutes and they should be “dovish”. Last week, the Fed outlined its exit strategy for quantitative easing and the market took the news in stride feeling that actions would not be taken anytime soon.

The economic news this week includes industrial production, initial jobless claims, CPI and PPI. They should be relatively bullish for the market. This morning’s Empire Manufacturing number came in much better than expected, but it did not have much of an impact on the market.

Support has been established and the market is trying to rebound. It is back above resistance at SPY 108 and I would close bearish positions. This rally could creep higher and the market is oversold. Option premiums are rich and I am selling some of the money put credit spreads on strong stocks. These positions are relatively small.

Keep your powder dry and wait for this bounce to stall. That will set up a good put buying opportunity. 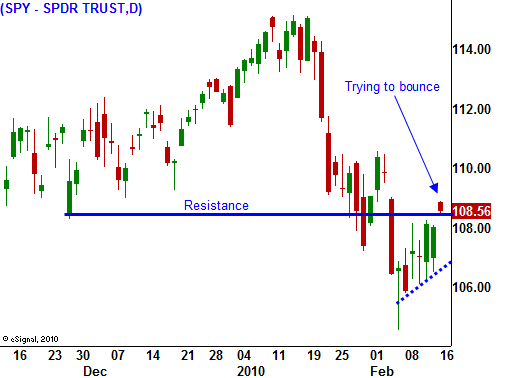