The Next Big Move Is Down – But We Need Casualties – That Might Take Time!

Yesterday, the market staged an impressive light volume rally. It closed near the high the day and it is well above SPY 108. Once the early momentum was established, sellers pulled their offers.

This morning, the rally is continuing. Housing starts and industrial production were better than expected and that has provided a small bid to the market. Earnings from John Deere and strength in Europe also provided support. Spain held a 15-year bond auction and the bid to cover was just over 2. That is a good showing for a longer term maturity in a country that has 20% unemployment. Don’t expect this to continue.

Corporations are making great money and they are beefing up their balance sheets. They know that trouble lies ahead and they are not hiring new employees or spending money on capital expenditures. Stocks are an attractive investment alternative with interest rates being very low and this is keeping the market afloat.

The massive market decline last year was caused by credit. Businesses could not borrow money on a short-term basis because the banking system locked up. Consumers are also unable to borrow money as lines of credit were pulled. I believe this is where we are headed in the next year or two and the conditions won’t spring back like they did in 2009.

Many analysts had forecasted a housing bubble and we started to see signs of trouble in 2007. There were many rallies and declines, but the market held up relatively well because there weren’t any “dead soldiers”. In 2008, Countrywide and Indy Mac went bankrupt and that is when the heavy selling started. Right now, we are in the calm before the storm. Traders know that major problems lie ahead, but until we have a major sovereign default, it’s business as usual. Once one or two countries fail, the market will go into a steady tailspin.

Yesterday, Dubai World said that they are considering paying bondholders $.60 on the dollar and payments would not start for seven years. This is an ugly reminder of how defaults are handled. Many banks, pension funds and governments have sovereign investments around the globe. A failure would have a huge ripple effect especially if a larger EU member like Spain falters.

China has been selling US treasuries and Japan is now the largest holder of US debt. We depend on China to support our bond auctions and if they reduce their participation, interest rates will rise. If they keep selling their US debt they will compete with our auctions and interest rates will spike. China is also stockpiling commodities and that is another way to diversify away from US dollars. They are investing in natural resource companies and they have signed many contracts in Brazil. The bottom line is that they don’t believe we can control our spending. They have even advised their own citizens to buy gold. These actions should be sending a big message!

Decades ago, if our government needed money, Americans would buy the vast majority of our debt. Now, the majority of our debt is purchased by foreigners. We depend on them to support our spend thrift lifestyle. If they lose confidence in our ability to balance our budget, the cost of capital will skyrocket just like it has in Greece. With an average maturity of four years, our debt will need to be continually rolled over. In the next five years, this will become a major problem.

Our deficits are projected to grow over the next five years and at best, Obama plans to freeze spending for three years on a tiny portion of our overall budget. In his speech today, he referenced Europe, China and Japan when he promoted high-speed rails. Bring up a population density map and it is obvious why this transportation mode is needed in those countries. We don’t have the same congestion and this is a giant waste of money. It will temporarily create jobs and the railroads will be grossly mismanaged just like Amtrak.

Decisions like this have Congress up in arms. The plans are half-baked and Democrats like Sen. Bayh (Indiana) have had enough. Americans are not happy and they will voice their anger in the November elections.
Stocks present a good value, but the credit markets could easily lock up in the near future. I still believe the next big move is down, but it might take months for the @#$$ to hit the fan. Until then, I will sell out of the money put spreads on strong stocks. I will also sell out of the money call spreads on cyclical stocks and commodity stocks. Once the SPY breaks 108, I will start buying puts. European banks will make the best shorts.
Trade small size, sell credit spreads and wait for that first shoe to drop (it could happen in a week or a few months). The market is quiet today and it does not feel like we will see much action. The Fed minutes are not likely to get much of a reaction. Initial claims and PPI are likely to offset each other tomorrow. I believe jobless claims will disappoint and PPI will be benign. 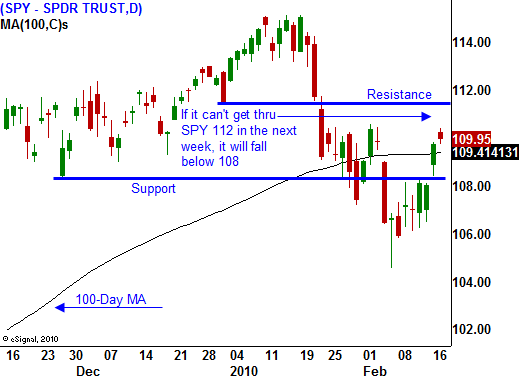