The Bad News Has Been Discounted and Disappointment Lies Ahead – Be Patient!

In the absence of any sovereign debt failures, the market is content to keep moving higher. Many analysts are discounting the dangers in Europe and they are focusing on good earnings, solid balance sheets and low interest rates.

The EU is currently meeting with Greece to discuss its game plan for a balanced budget. The market believes that the EU will back the next bond offering so that Greece has a chance to execute its plan. Germany is reluctant to back Greece’s bond offering and they would rather see the demand before they stick their neck out. The market is already expecting help and this has sparked a rally.

I feel that once the details are outlined, there is room for disappointment. The EU will take a very hard line with Greece and they dare not deviate from their cost-cutting plan. EU member countries are reluctantly providing support and they will be ready to pull the plug at the first sign of trouble. Greece will have to make additional cuts and civil unrest will escalate.

This process can continue for many months; however we are in the ninth inning of this game. This year our national debt could grow to $15 trillion. That is a 650% increase from its level in the year 2000. According to a former US Treasury comptroller, if you add in all of our nation’s future obligations (Social Security, Medicare, and pensions) our national debt is closer to $56 trillion. The average duration on our debt is four years and we will continually be refinancing it.

As I’ve been mentioning, the credit problem is not unique to Greece. The UK is also in deep trouble and the pound has been getting pounded. Spain is five times the size of Greece and it has a 20% unemployment rate. Here is a list of countries that are on the brink of financial disaster: Spain, Italy, Ireland, Portugal, Greece, Argentina, Venezuela, Lithuania, Latvia, Turkey, Ukraine, Bulgaria, and Dubai. When one of them defaults, the cost of capital spikes and credit to the other “problem counties” will dry up. This will ultimately drive them to failure when they are not able to raise capital so that they can meet their obligations.

This is a giant Ponzi scheme. Countries borrow money and spend more than they generate in revenues. This continues for decades until the money borrowed can no longer cover the interest owed to lenders. When the first tier crumbles, lending locks up and the problem spreads to larger countries like England.

Banks are the conduit for international commerce and they have investments around the globe. After the first round of failures, financial institutions will be evaluating counterparty risk. If a bank is deemed to have great risk exposure, other banks will stop doing business with them. This process continues to spread and eventually, credit markets lockup as they did a year ago.

The market can deal with a dismal Unemployment Report. It might discount it and wait for two or three months of disappointing news before sustained selling sets in. As I mentioned earlier, strong earnings and solid balance sheets can keep this market afloat. The same holds true for a decline in China’s economic activity. Investors will look for continued weakness before they panic.

On the other hand, a financial collapse is a completely different animal. As we saw last year, fear spreads quickly and corporations can’t function without credit.

Tomorrow we will get the ADP Employment Index. It will give us a preview of Friday’s number. If it is materially weaker than expected (-10k jobs) the market will decline. Otherwise, traders will discount the number and wait for the actual results. The more important number will be ISM service. It will be released 30 minutes after the open. Over 80% of our economy is based on the service sector and it has been weak relative to manufacturing. It was 50.5 last month and I feel it could fall below 50 (economic contraction) tomorrow. The market would decline on the news and resistance at SPY 112 would hold.

Today the market is testing resistance and I believe and this rally should be contained. Traders have been able to ignore all of the potential bad news and I feel we are set up for disappointment. I still need to see SPY 108 fall before I start buying puts. 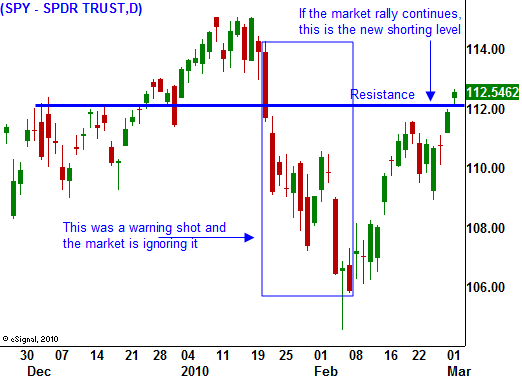