A Breakout Above SPY 112 and Decent Economic News Will Rally The Market – Be Careful!

Yesterday, the market continued to grind higher and it was able to close above resistance at SPY 112. Today, it has added to that breakout on decent economic news.

The ADP employment index showed 20,000 job losses and that was worse than expected. January’s number was revised to show 40,000 more job losses. ADP can vary substantially from the actual number and traders often discount it after the release. That was the case today.

In a separate report by Challenger, Gray & Christmas, planned job cuts sank 41% to 42,000 last month. They feel that it will only be a couple of months before companies start hiring employees.

ISM services rose to 53 from 50.5. That was much better than the median forecast of 51. The service sector is critical to an economic recovery since this sector accounts for 80% of our jobs.

The EU is meeting with Greece to outline the terms under which it will provide financial support. In essence, Greece had better demonstrate serious cost-cutting measures or the aid will be pulled. The market feels that this crisis will pass. By comparison, Greece is a small problem. However, when the EU is forced to hold three or four “emergency meetings” for other distressed members, the market reaction will be much different.

From a shortening perspective, we need to be patient. You have to resist the temptation to climb aboard the gradual climb higher. Only short-term traders using tight stops should attempt it. When prices finally reverse, they will fall quickly. This is the opportunity you need to be preparing for.

We are near the high of the year and resistance will get stronger. I am selling out of the money March call credit spreads today. I am picking stocks that have lost their momentum and would need to break out to a new high for the spread to the in danger. Friday’s Unemployment Report is likely to disappoint after weeks of dismal initial jobless claims. Bad weather could also increase job losses.

This is not a market that you want to short prematurely. That is why I am distancing myself from the action. Valuations are reasonable, balance sheets are strong, earnings have been good and interest rates are low. From a fundamental standpoint stocks could move higher. From a technical standpoint, we are still in an intermediate term uptrend.

It will take time for the next phase of the credit crisis to unfold. Be ready to buy puts on breakdowns. Financial and cyclical stocks will be the hardest hit.

For today, the market has broken through horizontal resistance and it should be able to creep higher on generally good economic news. As it continues to approach the highs of the year it will struggle to advance. A poor Unemployment Report should send it back below SPY 112 and this is why I like selling call credit spreads today. Look for credit spreading opportunities and keep your size small. 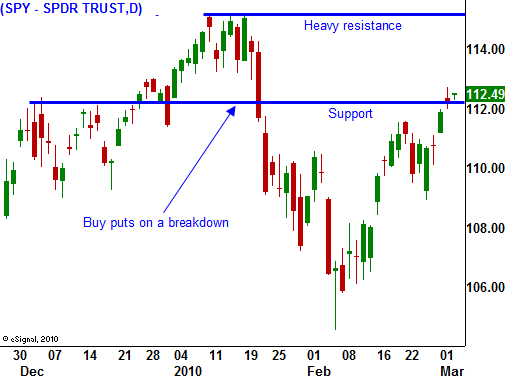