Expect Quiet Trading Ahead Of A Dismal Unemployment Report – Blame The Weather!

After a steep decline in January, the market has been able to claw its way back. Bears see a looming credit crisis that will freeze the financial system and bulls see strong balance sheets, excellent profits and low interest rates. A tug-of-war has resulted and the market has been stuck in a range the last four months.

Eventually, one side will prevail and that breakout will determine the market’s future direction. The economic news has been decent this week. ISM manufacturing and the ADP employment index came in as expected. ISM services jumped to 53 and that was better than expected. This is an important number since the service sector accounts for 80% of our economic activity. Challenger, Gray & Christmas reported that employers have greatly reduced planned layoffs. That should stabilize the labor market. This morning, initial jobless claims came in as expected at 469,000.

Tomorrow, the Unemployment Report will be released. Analysts are expecting 65,000 job losses, most of which can be attributed to heavy snowfall on the East Coast. If the number is dramatically worse than expected, the market seems prepared to discount the job losses as a one-time weather-related event.

Earnings season has passed and the economic calendar is very light next week. The market will be searching for a catalyst and we are likely to trade in a tight range.

The problems in Europe run deep and they are very real. GDP in the EU is flat and the unemployment rate is above 10%. Socialist governments have been spending money like mad for decades and national debt levels have reached their limit. The problems in Greece are simply a taste of what’s to come. One large member like Germany can backstop Greece’s debt, temporarily restoring confidence. The credit crisis won’t hit a feverish pitch until four or five EU members have lined up for aid. That timeline could be a month away or a year away. It all depends on the market’s appetite for risk. A few bad sovereign debt auctions will get the ball rolling.

The current environment reminds me of 2007. Traders knew that a housing bubble could lead to a credit crisis. The market would sell off and rebound on good economic/earnings news. It took almost a year for a sustained decline to set in and the market needed to see “dead bodies” (Indy Mac, Countrywide).

The US is one step behind Europe and our situation is not quite as dire. In less than 10 years our country will not generate enough revenue to pay interest on our national debt and entitlement (Social Security, Medicare). These basic expenses are essential and they don’t include defense, transportation, Homeland Security and education. They most certainly don’t include a national healthcare program. In five years our country will be forced to slash expenses and raise taxes. Medicare, Social Security and defense account for 75% of our budget and the cuts will be dramatic.

This freight train is approaching quickly and it is simply a matter of when the market decides to hit the panic button. For Greece, the time is now. Civil unrest is escalating as jobs and retirement benefits are being cut to balance the budget. This will reduce economic activity and anyway you slice it, pain lies ahead.

For the time being, trade this market range. Sell out of the money put credit spreads on strong stocks and sell out of the money call credit spreads on weak stocks. Generate income in distance yourself from the action while we wait for conditions to deteriorate. When the market finally does crack, the action will be fast and furious. Watch for sustained selling like we saw in the fall of 2008. I believe we will actually need to see a country fail for fear to reach a feverish pitch.

The next month or two should be business as usual, sell credit spreads. 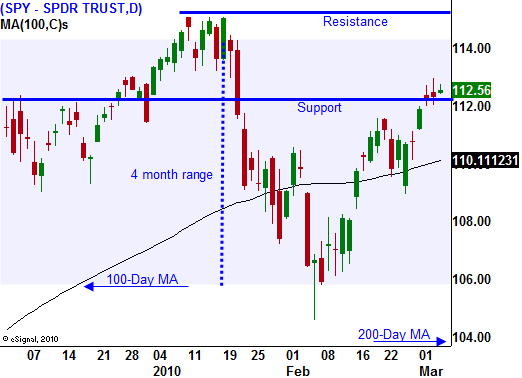