Yesterday, the market continued to march higher and it established a new high for the year. Economic news has been light and there is nothing to stand in the way of this rally. Solid earnings, strong balance sheets and low-interest rates will fuel this rally.

Every analyst on CNBC is bullish. The VIX has dropped down to two-year lows and confidence is high. The global credit crisis has been completely discounted and traders will need to see concrete evidence of a failure for this market to roll over.

Consumer sentiment dropped slightly in February and retail sales were mixed. February’s results came in better than expected, but January’s number was revised lower. Next week, industrial production, housing starts, PPI, CPI, initial claims, LEI and Philly Fed will be released. These numbers are not normally market drivers, but in the absence of other news, the market will react to the releases. As I mentioned before, the momentum is strong and I don’t believe that these numbers will force a major decline.

The FOMC will meet next week and they might take additional steps to exit their quantitative easing programs. I am not expecting any dramatic announcements and liquidity will gradually be withdrawn. The Fed knows that this recovery is very fragile.

The credit crisis that I outlined this week is very real and the storm will hit in the next two years. I will not fully embrace any rally knowing that the rug will get pulled out sooner or later. Personally, I hope for a massive rally. That will suck all of the implied volatility out of the options and puts will be very cheap. The market will also have farther to fall in the profits will be bigger.
If my own forecast holds true, there will not be a massive snap back rally. Uncertainty will rule the markets and they will struggle for many years while massive restructuring takes place. Europe, the United States and Japan account for most of the world’s wealth and they are all debt laden.

Oil demand is starting to creep higher in energy stocks look like attractive candidates for put writing. Oil production has been curbed and prices will start to climb. Keep your distance and know that a massive correction can come at any time. The higher this market moves in closer we get to that two-year timeline, the greater the chance for a big drop. 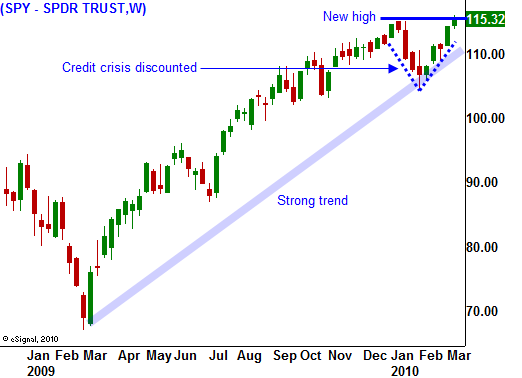