I feel so strongly about yesterday’s report that I want to keep it up for another day or two. Not much has changed overnight. Intitial jobless claims came in as expected, but the 4-week moving average increased by 5,000. The steady improvement has stalled and employment growth is less likely.

There is rioting in Greece after major budget cuts were enforcded. Unions are striking and the country is paralyzed. This same scenario will unfold as other countries are forced to curb spending. The rest of the report is a repeat from yesterday. If you have not read it, you should! This is not just important from a trading standpoint, the credit crisis will impact your future lifestyle.

Solid earnings, strong balance sheets and low interest rates are the focal point. The market will continue to push higher until there is concrete evidence that a credit crisis is imminent. Sell out of the money put spreads on strong stocks and get ready to buy puts on weak stocks when they break technical support. Option implied volatilities have dropped and options are relatively cheap. This same strategy could be used for many months. It’s just a matter of when the market starts to price in credit risk. Since the news is rather slow I thought I would discuss our looming credit crisis. At the bottom of this page you’ll find a table.

With regard to estimated tax receipts for 2010, the government expects to bring in roughly $2.4 trillion. The pie chart shows that over 80% of that income is generated from individual taxes and from Social Security/payroll taxes. Corporate taxes in the US are the second highest in the world. There isn’t a lot of room to increase them because companies like Halliburton, would just move their headquarters overseas. Even if corporate taxes were doubled, they wouldn’t add much to the total revenue. That means that new tax revenues would have to come from individuals. Over 70% of our economic activity comes from consumption and a tax increase would cut into discretionary spending.

Under the header “Mandatory spending” you can see that it eats up $2.2 trillion. The total revenues are $2.4 billion and there is only $200 billion of excess. Our country is painted into a corner. Years of overspending and gross mismanagement have resulted in massive debt levels. Our national debt is projected to grow by more than $1 trillion each of the next few years and that does not include an additional $300 billion/year (conservative estimate) for a national healthcare program.

The average maturity on our debt is four years. That means we will continually have to refinance it. Interest rates are low and the world seems content to finance our reckless spending habits. If that changes, our cost of capital will skyrocket. As you can see, we already spend $164 billion a year on interest. Given the additional debt over the next few years, is projected that our interest expense on our national debt will hit $550 billion in 2015. There is a good reason why we are not currently issuing long-term debt. For one, no one is interested in lending us money for 30 years at 5%. Secondly, if you multiply $13 trillion by 5%, our current annual interest expense would be $650 billion per year. We can’t afford it!

Look at all of the discretionary spending and imagine that all of it is cut out. That will never happen intentionally because voters won’t elect a candidate that would propose such drastic cuts. Nevertheless, let’s say that all of it can be removed. Assuming that Social Security payments increase 5% as they did last year (conservative), Medicare increases 6.5% and Medicaid increases 12%, our “Mandatory spending” would increase by $206 billion each year in just 2 years. This is not a stretch, it is going to happen. The average tax receipts during the last three years are $2.4 trillion. In two years (assuming everything goes well), our total tax receipts won’t cover our “Mandatory spending”.
Interest rates will almost certainly rise as the Fed starts to tighten. It is very likely that our interest expense will be $300 billion in two years. We are operating in the red in just two years! Again, these are mandatory expenses. Do we default on our bonds? Do we cut Social Security? Do we cut Medicare? Who will be the first to suffer?

Now you can add back all of the discretionary expenses and see how quickly the problem will escalate. Let’s also add $300 billion for a national healthcare plan and $200 billion /year for Fannie Mae and Freddie Mac.

A credit crisis is just around the corner. Trade the rally, but be prepared for a nasty decline. 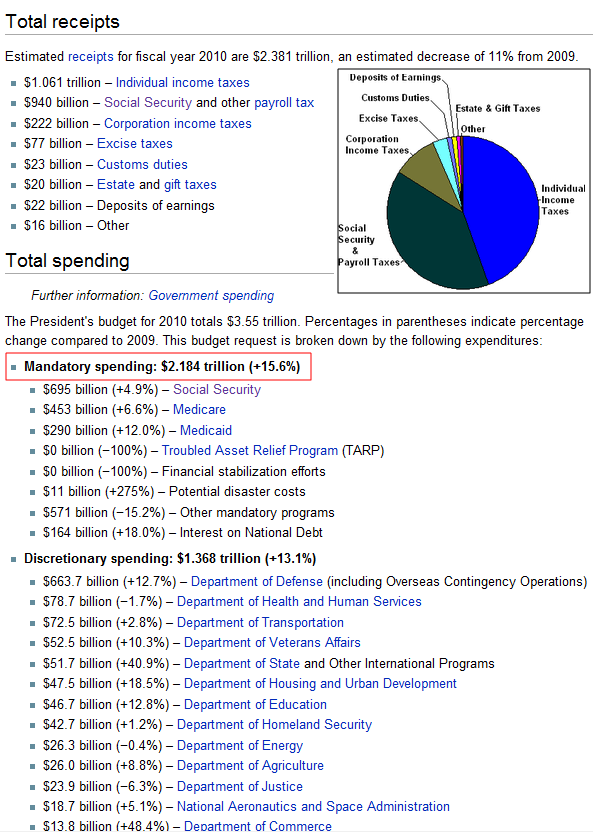