The National Healthcare Bill Passed – I Think I’m Getting Sick!

Analysts predicted last week that the national health care bill would pass by a narrow margin and it did. The country was divided on this issue and the debates were very heated.

At a time when our national debt is spiraling out of control, an additional $1 trillion will be spent on a new program. I’ve heard projections that the actual expense could be twice as high. Experience tells us that the government is very inefficient. Look Medicare/Medicaid and imagine the waste as 32 million Americans enter a national healthcare system.

Resources are finite and every economist knows that when demand increases and supply stays the same, prices rise. If prices are controlled, rationing results. Americans that had health insurance can expect lower quality care. Book your appointments now and schedule your surgeries.

During its first 225 years, the US national debt was less than $2 trillion. In 10 short years, it has grown to $15 trillion. Spending is out of control and our revenues barely cover the essentials like interest, Social Security, Medicare/Medicaid. Discretionary items like defense, homeland security, education, transportation and the VA cost an extra $1.4 trillion each year. This means our nation will quickly fall further and further into debt each year.

At some point, bondholders will realize that they are never going to get paid back. When that happens, our bonds will trade at a huge discount and credit risk will be priced in. This will raise our cost of capital and ultimately push us into default. If interest rates rise to 5%, we will pay $750 billion per year on $15 trillion of debt. Social Security costs about $800 billion per year, and Medicare/Medicaid is also $800 billion per year. That is a total of $2.4 trillion for these three items and it is higher than the projected tax revenues for 2010. Remember, baby boomers are retiring and these costs will increase dramatically in coming years.

Now imagine that Europe is in even worse shape than we are. It won’t take much to push us into a global credit crisis.

Jobs have been slow to recover and severance benefits are running out. Unemployment benefits have been extended and they are also running out. This means that consumption will start to decline. Businesses are slow to rehire in the US. Multinationals are expanding operations in emerging markets where labor is cheap and growth prospects are strong. As the government stimulus winds down, this economic recovery will stall. We should see signs of this in a few months.

This morning, the market declined on the healthcare news. Traders fear that taxes will be hiked to pay for the massive deficits. That early pessimism has faded and the market has moved into positive territory.

Over the weekend, India raised interest rates and many believe that China will do the same after raising reserve requirements 3 times this year. Emerging market growth justifies higher rates and credit risk in Europe and the US also warrants higher yields. Interest rates should start creeping higher and that will provide a stiff head wind for the market.

Durable goods orders, GDP and initial claims are the big numbers to be released this week. I believe all three will be “market friendly”. The volume has been light during the recent breakout and one bad event could spark selling. A drop below SPY 115 would signify a false breakout and prices could fall quickly as bullish speculators bail out of positions. I don’t want to sell premium at this juncture. I am buying a few calls on healthcare stocks, but these are tiny positions. I am waiting for my put buying opportunity on cyclical stocks.

Watch the late day action. If the market declines in the last hour, buy puts. Add to the position tomorrow if we close below SPY 115 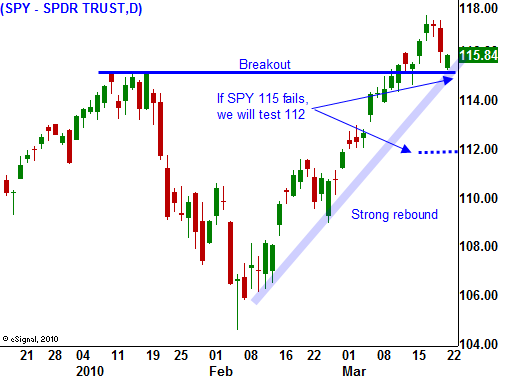