The Market Is Waiting For A Catalyst – Sit Tight And Don’t Force A Trade!

I wish I had some spicy commentary to add today, but I don’t. The market is waiting for a catalyst and the volume has dropped off dramatically.

The momentum is strong. Yesterday, the market was ready to sell off after the new healthcare bill was passed. After an early decline, the market snapped right back and finished higher. Apparently, bulls believe the Congressional Budget Office (CBO) and the program will pay for itself.

Traders want to see strong signs of economic improvement before they buy stocks. The unemployment picture has not improved the last three months and we have not seen job growth. Unemployment benefits are running out and so are severance packages. Eventually, this will weigh on consumption.

Many analysts are looking for employment growth in next week’s Unemployment Report and they feel that companies are rehiring. The government will be hiring census workers and that might offset state workers that have been laid off. Companies have been able to increase productivity and they aren’t anxious to increase expenses. When they do hire employees, they are doing so overseas where growth prospects are higher and wages are lower. I don’t believe we will see robust job growth this year.

Interest rates will start creeping higher. India raised rates last week and China is considering the same. Some Fed members are calling for higher rates and they believe the phrase “extended period of time” should be removed. If interest rates rise because economic conditions are improving, that is a good sign. However, interest rates can also go up because inflation is rising and credit risk is higher. These are not bullish for the market. Inflation has not been a concern, but credit risk is on the rise.

As long as economic conditions continue to gradually improve, the market will grind higher. Companies are making good money and interest rates are low. Investors don’t have many attractive alternatives so they will keep their money in the market. Economic conditions would have to deteriorate for months on end before the market rolls over. There will be plenty of warning signs as this occurs. Eventually, traders will start pricing in a double dip recession and that will lead to a sustained decline.

This scenario will take months to unfold. Governments will continue to print money to stimulate the economy and they will have marginal success. Unfortunately, debt levels will continue to grow until they reach a breaking point.

Italy needs to refinance €256 billion this year. Its national debt is well over 100% of its GDP and their upcoming bond auctions will be monitored closely. Greece has to secure financing for €16 billion in the next six weeks. Italy is waiting to see how that turns out and they want to see if the EU provides support.

Bond auctions in the US and in Europe will be important to watch – they are the wildcard in all of this. If bondholders feel that they won’t be repaid, they’ll stop buying the debt. Many major nations (US, England, Japan, Spain, Italy…) will not see a budget surplus ever again. Interest payments on national debt and social programs don’t even cover tax revenues. Each year they will slip further and further into debt. A credit crisis would cause a very swift market decline.

This week, the US will hold major bond auctions and $118 billion in treasuries will be sold. China has stopped buying US treasuries and they are a net seller. Relations between our two countries are strained. The passing of the national healthcare program will drive us further into debt. You can’t provide health care to 32 million people without incurring huge costs. It will be interesting to see how these two events will impact the demand for our bonds this week. Since the maturities are relatively short term (2-year, 5-year, 7-year) the actions will probably go fairly well. However, this is a potential “fly in the ointment” in a lackluster market.

Look for a quiet market that favors the upside. Danger looms and I still feel that the rug can get pulled out from under us at any time. Buy puts on cyclical stocks if the SPY breaks below 115. I am waiting patiently. I don’t want to buy calls because the market has stalled and I don’t want to sell credit spreads because the implied volatility is at an 18-month low. 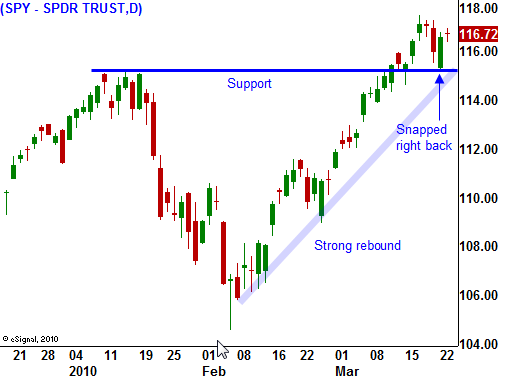