Yesterday, the trading action was about as dull as it gets. For most of the day, prices stayed within a very narrow range and the volume was light. Late in the day, a small rally pushed us to new highs. The momentum is fairly strong and bullish sentiment is everywhere. Analysts are finding the silver lining in just about every release.

Strong rallies are typified by early weakness and strength into the close. We are likely to see that pattern today.

The market is trading lower on news that Portugal’s debt is being downgraded by Fitch. This news was expected and Portuguese bonds are actually trading higher (lower yield) after the news. On a longer term basis, this downgrade is consistent with my thought that we are going to have a credit crisis. More and more EU members are going to have their debt downgraded. For now, I believe the market will be able to shrug this news off as it did with Greece. We need a major country like Spain, Italy or the UK to be downgraded. All of three are in very bad shape.

Japan said that exports fell month-over-month in February. In particular, exports to China fell month-over-month. That is not a good sign, but the Chinese New Year was in February this year. Last year it was in January and that accounts for the difference. On the surface this looked significant, but it is not. These news items will not produce a lasting decline.

This morning, durable goods orders came in as expected. The number was pretty good and it showed an increase in business spending. That is critical since we need to see signs of organic growth for employment to rebound.

Tomorrow, we will get initial jobless claims. Again, many economists are calling for a good number and they expect employment growth when March’s jobs number is released next week.

I am still very skeptical of this market and of the recovery, but today’s news is not likely to cause more than an opening dip. I don’t want to fight the tape and I don’t want to trade it. Conditions are overbought and they can stay that way for an extended period of time. One news item is all it will take to spark a swift decline.

The healthcare bill had the potential to be a spoiler and it will have a long-term impact on our national debt. Most of the changes won’t take effect immediately and the expenses won’t crank up until the end of the president’s first term. It seems that anything more than six months out has no influence on trading.

As long as good news trickles in, it will drive this market higher. Great earnings, solid balance sheets and low interest rates are making equities an attractive investment alternative.
It will take a major news item to stop this rally and I don’t know that we will get one in the next month or two. A debt downgrade in Spain, Italy or the UK would do it. A very poor bond auction in any of those countries would also raise fear. Alternatively, a slowdown in China or rising domestic unemployment would produce a sustained decline. With every passing month we draw closer to one of these events.

For now, I expect to see prices grind higher. This morning’s pullback will run its course and we are likely to see late day buying. Support should hold at SPY 115. If by chance that level fails, buy puts. I have a few call positions on that will be easy to bail out of. I am waiting for a breakdown and I know that when it happens, the profits will be huge compared to the nickels and times I can be making during this rally.

Option implied volatilities are very low. Stay away from credit spreads. If you want to make a little money on the upside, consider buying calls. Tech, retail and healthcare present the best opportunities. Keep your size small and limit the number of positions so that you can get out quickly. 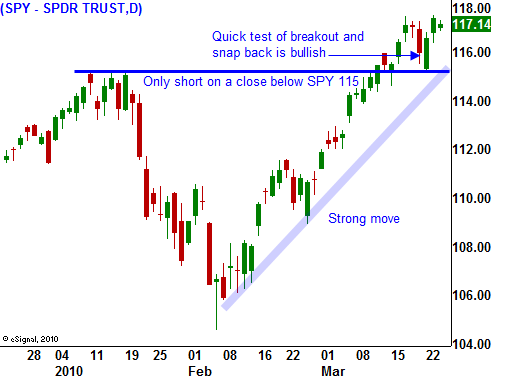