Watch The Bond Auction This Afternoon – It Could Be A Warning Sign!

After a day of rest, the market is resuming its rally. It has broken out above horizontal resistance at SPY $115 and is making a new high for the year. The momentum is strong and the path of least resistance is up.

There are many bullish influences and they are the focal point. Corporate earnings are strong and year-over-year comparisons are favorable. Companies have slashed payrolls and any increase in revenue goes right to the bottom line. Balance sheets are strong and corporations have been aggressively paying down debt. They are using some of that cash for M&A and stock buyback programs. Low interest rates make equities and attractive investment alternative. These factors are likely to stay intact.

This morning, jobless claims fell 14,000 to a seasonally adjusted 442,000. Many analysts expect job growth when the Unemployment Report is released a week from tomorrow. A good number is already factored into the stock market. If the employment picture improves, the Fed will be forced to raise interest rates.

This morning, Ben Bernanke told the Financial Services Committee that the US economy still needs help from the Federal Reserve. When the government’s stimulus starts to run out, employment will rest on the shoulders of corporations. Companies have increased productivity and they are reluctant to hire. States are already starting to lay off workers because they can’t meet payrolls. These losses will show up in coming months and I do not believe we will see sustained employment growth.

Behind all the good news lies a massive credit crisis that grows every day. It is inconceivable that major nations could default and the market refuses to believe this can happen.

This year, the US will pay out more in Social Security than it receives in Social Security payroll taxes. This was not projected to happen until 2016. People that were laid off and planned to work a few more years decided to retire. Baby boomers will start collecting benefits at an accelerating rate in the next few years and this problem will grow. It is no longer a problem for future generations, this is happening now.

In two short years, interest on our national debt and entitlement (Social Security, health care, Medicare/Medicaid) will equal all our tax revenues. We will continue to spend over $1 trillion a year on other essential programs like defense, education, transportation and homeland security. Each year we will fall further and further into debt because our revenues barely cover mandatory expenses. Eventually, bondholders will figure out that they will never be repaid and the cost of new capital will skyrocket. I don’t take pleasure in painting this picture, but I hope that some of you will heed my warning.

To put this into perspective, during its first 225 years, our country had $2 trillion in national debt. In 10 short years, we have grown that to $15 trillion.

Americans have been over spending for decades and we have very little saved for retirement. Our country used to domestically finance its own needs. Now, foreigners own 50% of our debt. China is one of our largest debt holders and they have become net sellers of US Treasuries. We are cavalier enough to demand that our largest debt holder change its currency policy. It is not wise to bite the hand that feeds you.

If China does let its currency float, inflation in the US will skyrocket. Imagine all of their imports jumping in price. This would be like a tax on consumption.

Yesterday, our five-year bond auction did not go well. Today, the Treasury will issue $32 million in seven years notes. I do not expect this auction to go well either. Longer maturities have smaller demand (I wonder why?). Our deficits are growing at an alarming rate and the nation-wide health care program will push us over the edge. If interest rates start creeping higher due to a lack of demand our cost of capital will escalate. Watch the bond auction this afternoon; it could be a warning sign.

The EU is currently holding a summit and Greece’s fate will be determined today. Reporters believe that a collaborative effort between the EU and the IMF will yield the support it needs. However, stringent conditions will be enforced. This whole drama has surfaced over a tiny country. Imagine what will happen when a major nation needs help.

Italy waits in the wings and it wants to see how this is resolved. Its deficit is more than 100% of its GDP and it needs to raise €250 billion this year. It will be the next shoe to drop. Italy is the third-largest member in the EU and it will make Greece’s problem look small.

My long-term forecast will look foolish as the market pushes to new highs. It could take a long time for the credit crisis to unfold. This is not in anyone’s best interest and the major economic power houses will do everything in they can (like printing money) to keep it from happening. Eventually, we will reach a breaking point. The timing of this event is almost impossible to predict since the problem has been building over decades. I believe the credit crisis will hit in the next two years. If the market starts to discount it ahead of time, the crisis will unfold much earlier.

There is no need to stand in front of this runaway market. In fact, you can embrace it. Just do so in a very small way and be prepared for a big decline that could come at any time. Option premiums are cheap and you should be a call buyer. This will also limit your downside risk. Reduce the number of positions you hold so that you can get out quickly. If the SPY closes below $115, exit all your call positions and buy puts. As a subscriber to the Daily Report, you are ready for anything the market might throw at you. Our bullish picks are screaming higher and our bearish picks are ready for action. 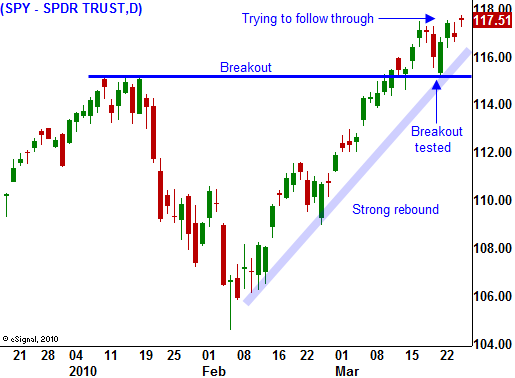