This Pattern Could Repeat- Look For A Sharp/Swift Market Decline!

Yesterday, the market finally took a breather. Prices have climbed steadily during the last six weeks and we are due for a pullback. Today’s chart tells an interesting story and there is a good chance this pattern will repeat.

In January, the market broke out to new highs after trading in any fairly narrow range. That move came just before earnings season and the optimism was high. Bullish speculators rushed in and option implied volatilities dropped. This activity reached a climax the week before option expiration. The credit crisis in Greece was completely discounted, but conditions were deteriorating.

Sellers took some chips off of the table and the market failed to hold the breakout. Bullish speculators were forced out of their positions and they pushed the market lower when they bailed. Great earnings results were already priced into stocks and they declined once the actual announcements were made. This swift decline was nothing more than a technical selloff from an overbought condition.

Fast forward three months and you can see this same pattern unfolding. The market has broken out to new highs, earnings season is approaching, the VIX has declined and option expiration is next week. There are a couple of differences this time around. The bullish call buying is not as heavy as it was in January. That means sentiment is not quite as overextended. However, the situation in Greece is worse and that could lead to a more sustained decline.

The credit crisis in Europe is going to escalate in the next few months. A tiny country like Greece had to come crawling for aid. Imagine what will happen when Portugal, Spain and Italy ask for help. The PIIGS countries will be issuing huge amounts of debt in the next three months and demand will be weak. Investors are pulling money out of Greek banks and this will push them closer to default. Interest rates jumped more than a full percentage point overnight and that is why the market is weak this morning.

Spain has enormous debt levels and it accounts for 12% of the EU’s GDP. That is four times as much as Greece. The unemployment rate is 20% and investors will demand higher yields when they auction bonds.

This morning, initial jobless claims were worse than expected. Traders are anxiously awaiting job growth, but they have been patient. Strong retail sales took some of the sting out of the jobs release. Department stores and specialty retailers posted great results in March. Some of that could have been related to pent-up demand during unusually harsh weather conditions in January and February.

A close below SPY $118 would be bearish and you can purchase puts if that happens. This is a technical decline and you should not take a large position unless SPY $115 is breached. That is a major horizontal support level and if it fails, the selling will accelerate.

I believe we are set up for a short and swift decline that will flush bullish speculators out of the market. Greece will get its aid and things will calm down during earnings season. By mid-May, additional credit problems in Europe will start to surface. That is when we could see a sustained decline especially if job growth is missing. 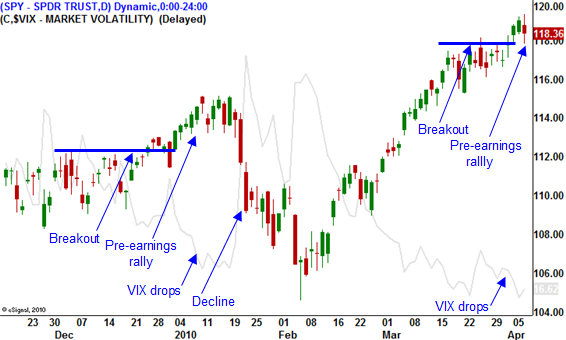