Yesterday, the market ignored all of the bad news. Tightening in China, a failed terrorist attempt in New York City and one of the largest oil spills ever did not dampen spirits.

Greece secured its aid package and the market staged a relief rally. That celebration was brief and today, concerns are renewed. Each EU member has to approve the aid and Germany is the key to all of it. They are holding elections and this bailout has not been popular with German citizens. They will drag their feet to send a message to Greece and others.

Even after Germany approves the loan, analysts will still wonder if $145 billion is enough. Skeptics don’t believe that Greece will follow through with its austerity programs. Demonstrations in Greece have broken out and in some cases they are violent. The nation’s Air Force called in sick last week. The whole country is threatening to strike and that does little to instill confidence.

As I have been mentioning for months, the credit crisis will spread. Greece is a microcosm of Europe. Interest rates in Portugal and Spain are starting to climb. This is a very slippery slope and once fear sets in, it is almost impossible to reverse. Debt levels in Europe are extraordinarily high. Spain is too large to bailout and other EU members don’t have enough borrowing power to save them. Ireland, Italy and England are in dire straits. For that matter, the US and Japan are struggling with their own deficits.

As time elapses, the problem will grow. Each nation will quickly realize that it needs to solve its own problems and everyone will have to fend for themselves. In the process, the US will longer be seen as the “safe haven” that it has been for decades. Our debt levels are skyrocketing and in two years, we will barely be able to pay for interest on our national debt and entitlement (Social Security, Medicare, Medicaid and pensions). Each year we will slip further into debt as we continue to spend $1.4 trillion on other essentials (Homeland security, Defense, education, transportation…).

I don’t believe that this decline is “the big one”. The market is overbought and bullish speculators need to be flushed out. We are near a long-term top, but it will take time to gather bearish evidence. In 2007, analysts predicted a “housing bubble”. That possibility seemed remote and the market continued to march higher. We even established a new all-time high on the S&P 500 in October 2007. The market needed to see casualties (Indy Mac, Countrywide) before it would decline. Once that materialized, you could not find a bid.

Corporations have been fiscally responsible and their balance sheets are strong. Revenues and profits have exceeded estimates. Stocks are fairly valued (if not underpriced) and interest rates are low. This will keep a bid to the market while conditions deteriorate. There will be a series of declines and the market will recover each time. The credit issues will be downplayed and each week there will be promises and commitments to keep investors satisfied. Eventually, we will reach the breaking point and then everyone will throw in the towel. That is when you want to be short and you want to hold on to your positions!

The problem with “valuation” is that it can’t account for a credit crisis. Last year, stocks fell farther than anyone could have imagined. The financial system locked up and cash flow ran dry. Strong corporations could not secure short-term funds and they were struggling to meet payrolls. Investors panicked. They sold investments and pulled money out of banks. Many bought guns and safes. This was only a year ago. We learned that stocks can plunge even if they are attractively valued.

The market has broken a minor support level at SPY 118 and I expect it to test 115 in short order. There have been a series of major declines near the relative high. This is a major warning sign and the volume has been heavy during the selloffs.

Profit-taking has set in. Buy puts on weak stocks. Initial jobless claims have been rising the last four weeks and nervousness will set in ahead of Friday’s Unemployment Report. If the market finds support at 115, take profits on your put positions. If it breaks below that level with ease, double up on your positions and look for heavy selling.

We are transitioning into a long term cycle where you will want to “sell the rallies”. 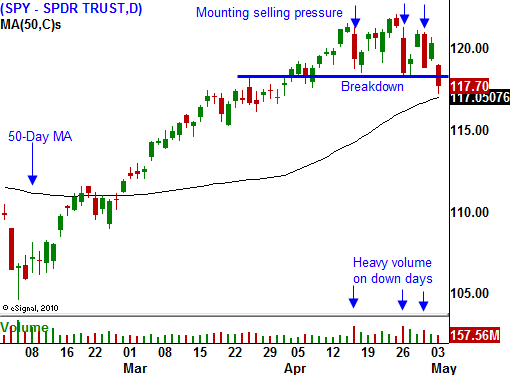