Let This Rebound Run – When It Stalls This Week – Get Short!

Yesterday, the market staged one of its largest one-day rallies ever. Fear that a European credit crisis would spread around the globe was shattered when the EU proposed a $1 trillion contingency fund for troubled members.

For weeks, the Eurodollar had been getting crushed. From the onset, the EU did not know if it should bail out members. As time elapsed, they realized that the entire structure was in jeopardy. This enlightenment reminds me of the process we went through in 2008. The Fed decided to let Bear Stearns and Lehman fail and the entire financial system almost collapsed. From that point on, they quickly realized their mistake and they fought hard to get ahead of the curve.

The EU’s “shock and awe” forced shorts to cover their positions. By the close, the S&P 500 had rallied 50 points. After an initial selloff this morning, prices have reversed and the market is adding to yesterday’s gains.

Stock valuations are very attractive and low interest rates will keep a bid to this market until the credit crisis is painfully obvious. The problem is not valuation, it is credit. That is the fuel that makes everything run. When economies run out of gas, they come to a grinding halt. We saw this last year when credit froze. Banks could not assess counterparty risk and they stopped lending. They also could not value their holdings. Corporations and consumers could not fund their short-term needs and we had a cash crunch.

This entire emergency fund news event is somewhat comical. There is not much substance to the announcement and the market rallied because it was grossly oversold. Most of the EU countries have no money to contribute and this bailout fund is theoretical.

If one of the EU members (like Spain) starts to fail, they will qualify for aid. The terms and conditions have yet to be worked out. No money has been “forked out” and that won’t happen until the need exists. There is plenty of time for countries to change their mind and it will take time to raise cash.

If all goes as planned, the markets will adjust European bond rates higher knowing that Germany and others need to issue debt to backstop the rest. The cost of capital will go up for all EU members.

This action was meant to send a message that the EU is unified. I question each country’s commitment. Promises are easy to make, but they are tough to keep. We won’t know this answer until the need arises.

This commitment is not necessarily a good thing for stronger EU members. They will all be dragged down by countries that have been spending way beyond their means. Conflict will break out in all of the countries. Each will want to govern its own matters and the temptation to fend for one’s self will be strong. Germany has been kicking and screaming the whole time and their Prime Minister Angela Merkel (instrumental in getting this passed) is losing voter confidence.

When push comes to shove and emergency funding is required, weak nations like Portugal, Spain, Ireland and Italy will be asked to contribute. Where are they going to get the money from? They are perilously close to default themselves and they are already camping on EU’s doorstep.

As the largest member of the IMF, the United States will also be contributing. In fact, we will be giving Greece $8 billion via the IMF. We will also be funding this EU slush fund since one third of it will come from the IMF. Our debt levels are astronomically high and we can’t afford the aid either. All of this “Monopoly money” will prolong the game.

The market senses danger and the credit crisis is being acknowledged. We are not going to see another run away rally.

In the last quarter, our GSE’s (Freddie Mac and Fannie Mae) have burned through cash like mad. Collectively they want another $20 billion. Just a few months ago, the treasury backstopped them for $400 billion.

For now, the focus is back on earnings and interest rates. This short covering rally will run its course quickly. Fear has returned to the market and major support levels were violated last week. I believe the highs for the year are in and we can start shorting failed rallies. When this market rebound loses its momentum, start scaling into short positions (sell out of the money call credit spreads). Cyclical stocks are priced for a full economic recovery and they are vulnerable. Focus on companies that rely on credit (autos, heavy equipment) and have relatively high debt levels.

Chinese stocks have rolled over and they did not bounce yesterday. They have been in a steady decline for many weeks. If China’s economy slows, global markets will decline. All hopes for an economic recovery start there. I feel this rally has one or two days left in it. SPY 118 is first resistance. If we close below SPY 115, buy puts. 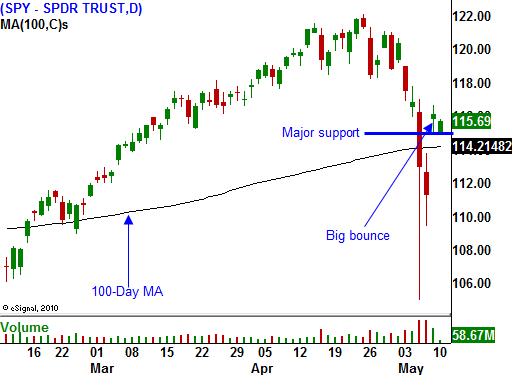