A Temporary Low Has Been Established – I Expect This Rally To Last Into Friday!

I want to get this morning’s comments out early so I will keep this brief. After a dramatic decline, the market is grossly oversold and it is due for a snap back rally.

The key technical signs to watch for were explained yesterday. First, we needed to see a deep intraday decline and a bullish reversal into positive territory. Yesterday, we got that after a 25 point S&P 500 decline. The buying started early in the day and it continued right into the close. Secondly, we needed to see follow-through the next morning. Today, we have the S&P 500 up 12 points on the open. I believe a short-term low has been established.

The lows from February (SPY 104) held. Now that prices have stabilized, the VIX is starting to pull back. End of month fund buying will support the market.

Europe is the key to this rally. Overnight, a $1 billion bond auction went well in Portugal. The concern is that PIIGS have to raise a lot of money in the next few months and that interest rates will spike. At least for the time being, that is not the case. This will be a week-to-week concern as other countries try to sell bonds. Germany also held a bond auction and it did not fare as well. Investors are worried that they will jeopardize their own financial stability trying to save weak EU members. This is a warning sign for Germany.

Durable goods orders came in better than expected and that is a small positive for the market. Earnings and economic releases are relatively insignificant compared to the European credit crisis.

As the holiday weekend approaches, trading should settle down. Bears will try to lock in profits ahead of the weekend. They don’t want to be exposed to a major announcement (emergency bailout plan) from the ECB or IMF.

The market has already price in a default in Europe and the dramatic selloff seems a little premature. If price stabilize, good earnings, strong balance sheets and low interest rates will fuel a nice rally. Furthermore, concerns of a Chinese economic contraction are premature. Their growth is still strong.

Don’t misconstrue my comments. I am bearish. Markets rarely go straight up or straight down. I simply feel that we are due for a bounce.

If today’s rally is strong into the close, there is a good chance that we will rally Thursday and Friday. The key element for that scenario lies in tomorrow’s initial jobless claims number. If it is in line, we will push higher. On the other hand, if today’s rally is wimpy and we don’t see a late day surge, this bounce could be relatively small.

I believe we will see a 20+ point rally in the S&P 500 today and we will see buying into Friday’s close. 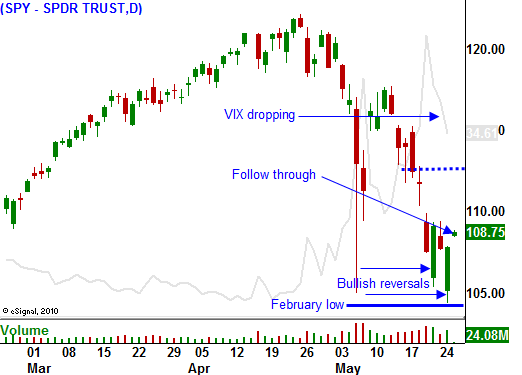