Yesterday, the market ignored the late day rally from Friday. The weekend passed without any new emergency plans in Europe and bears hammered stocks. That pressure mounted in the final hours of trading and we closed on the lows of the day.

In after hours trading, the S&P 500 futures continued to drift lower. Overseas markets experienced heavy selling and that set us up for a very negative open. The S&P 500 gapped down 25 points and panic selling has set in.

No matter what the EU does, the market ignores every action. There is a feeling that they have reached the point of no return and defaults are imminent. Debt levels are astronomical and spending will not fix this problem. That has been the solution for many decades and it will not work any longer. Bond investors don’t feel they will get their money back and they are demanding higher rates of return.

Each year, these countries sink further and further into debt. Most have not run a budget surplus in decades and they have a history of defaulting. Strong EU members are likely to get dragged down with the rest. Germany, France, Austria and Switzerland have tremendous investments in “Club Med” (Portugal, Spain, Italy and Greece) and the cancer is inoperable. If they let these countries fail, they will suffer huge losses. Their financial condition is not that strong to begin with and their debt levels are also very high.

Similarly, the US is not in a position to send financial aid. We have massive deficits of our own and they will increase dramatically if we experience a double-dip recession. That is why we invoked our IMF veto power. As the largest contributing member (17%) we reserved the right to refuse a bailout for any country that we deem insolvent. The US can’t afford to throw good money after bad. Last year, banks were assessing counter party risk. Now, entire nations are doing it.

As I warned months ago, the credit crisis did not go away. It merely shifted from the private (banks) to the public sector (governments).

Liberal social programs and reckless spending have finally run their course. When the market ignores your promises, you are in the final innings of the game. Nothing you say or do will make any difference and investors will flee like rats from a sinking ship.

I am a little surprised at how quickly we’ve reached this juncture. I felt that the bullish momentum, attractive stock valuations and low interest rates would support this market for a month or two.

Investors remember the horror from a year ago and they aren’t taking any chances. Prior to 2008, a financial collapse was unthinkable. Now is not so far-fetched.

Asset Managers are still giving this market a “two thumbs up” on CNBC. They refer to this as a “normal correction” and they are bullish. They know that bearish comments will scare people out on the market and they won’t be able to generate management fees. When the @#$% hits the fan, they will have plenty of excuses. In the end, they only care about fees and relative performance anyway. If the market is down 30% and they lose 25%, they consider that a victory – I don’t.

Don’t listen to them. Credit spreads are widening and that means that banks are pricing in risk. If we go through a credit crisis and countries default, we could easily slip into a global depression that would take decades to work out of. During that process, debt restructuring would take place and currencies would fluctuate wildly. This price discovery process could take years. Stock valuation won’t mean a thing. Investors will have to sell holdings to generate cash so they can put food on the table and markets will tumble.

I don’t take my comments lightly. I have a huge subscriber base and I know that many of you will heed my warning. Tough times lie ahead.

In the short-term, we are way overdue for a bounce. Option implied volatilities have spiked and prices should stabilize heading into a holiday weekend. I would not buy calls, but I am sell some out of the money puts. Look at the premiums and you will see that you can distance yourself from the action. A continued decline is priced in. There is a nice edge to selling puts at this level. In the chart, you can see the VIX spike.

Any rally is likely to be fast and furious. Once it stalls, sellers will start unloading stocks again. Remember, anything the EU says is being discounted and they are in a no win situation. It is very easy to sell in this environment. Speculators (at least the smart ones) have stopped buying puts because they are too expensive. Any further selling is from forced liquidation (hedge funds needing to meet margin calls) or risk reduction (investors selling long stock positions).

Don’t get too anxious on the intraday rallies. It is the close that matters. If we close strong and follow through the next day, the short term lows are in. I feel the February lows (SPY 104) will hold. We are very close to that level. Fear is impossible to predict so watch the close and use that as your guide 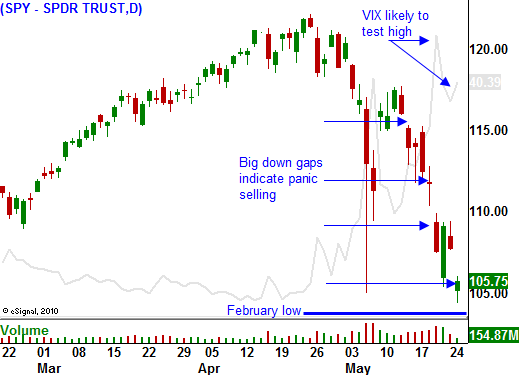