Prices Should Hold Up Into The Weekend and Early Next Week. Keep Your Size Small!

Yesterday, the market finally staged an impressive rebound. Prices had tested support at SPY 104 three times and in each case a sharp snap back rally resulted. That was a level that attracted buyers and bears realized that they needed to take profits.

After a sharp reversal from a deep decline Tuesday, it looked like stocks might push higher Wednesday. The market opened well into positive territory and it seemed as though we had the continuation we’ve been looking for. By late afternoon, stocks drifted lower on rumors that China was dumping Eurodollars. The market quickly sold off and we finished the day in negative territory. The Chinese quickly stopped this rumor from spreading and they said that their Eurodollar policy had not changed.

Of course it hasn’t. They have been selling dollars and Eurodollars for years. They are using their piles of “funny money” to purchase assets around the globe. In particular, they are buying up Africa. This is actually a smart move on their part.

Regardless, the market was pacified and it rallied on the news – we were due for an oversold bounce. Earnings are strong, balance sheets are flush with cash and interest rates are low. During the early stages of this market transition, bulls will still buy dips. They view this as a “normal correction” and the pullback presents an opportunity.

China is still growing, our economic activity is still improving and there has not been a sovereign default. It will take a few months for these conditions can change.

Traders wanted to lock in profits ahead of the long weekend. They did not want to be blindsided by news over a three day weekend. Furthermore, end-of-month fund buying supported the market. This relief rally should last into next week.

In one short day, the SPY has almost rallied to the first resistance level of 112. It should be able to get through that with ease and challenge 115. That was major support and now it represents major resistance.

It’s important not to get too cute on these rallies. Play them, but keep your size small knowing that the bigger moves will come on selloffs. Option implied volatilities are still high and selling out of the money put spreads is the way to go. I have been focusing on tech, retail and some commodity stocks.

When we come back next week, be ready for a heavy dose of economic releases. ISM manufacturing and ISM services should be strong and that will support the market. Traders tend to downplay the ADP employment index and it is not likely to have much of an impact. It measures private sector job growth and I will be watching the number closely. If corporations are not hiring, it’s just a matter of a month or two before employment conditions start deteriorating.

Once this rally stalls, be prepared to buy puts. You won’t have much time to act. Fear has returned and last year’s credit crisis is still fresh in our minds. The market does not believe that the EU will survive and their rhetoric means little. Investors are nervous and they are ready to bail.

Look for longer-term out of the money opportunities. You can start scaling into those positions once this rally loses its steam. The next decline is likely to last longer and be more severe.

Please remember to honor those who have preserved our freedom this weekend.

Have a great Memorial weekend. 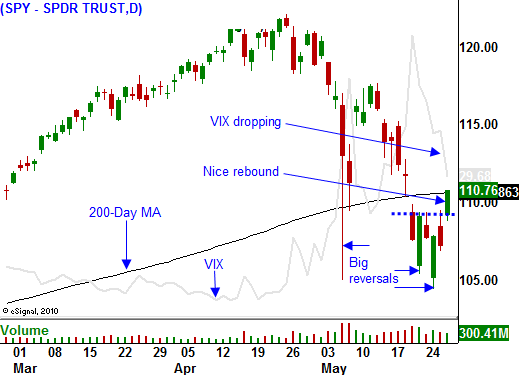