Last week, the market finally staged an impressive rally from a deeply oversold condition. Thursday, the S&P 500 surged 40 points. Support at SPY 104 (February’s low) has been tested three times and in each case, a sharp intraday reversal resulted. Bulls had been nibbling at that level and they finally bought stocks aggressively.

The table was set for follow-through on Friday. Traders were eager to take profits on short positions and end-of-month fund buying also supported prices. The market opened considerably higher and it looked like we would have a positive finish to the week. Mid-day, Fitch lowered Spain’s bond rating. Traders instantly hit the sell button and we closed near the low of the day. Half of Thursday’s gains were erased.

The news was not unexpected. Conditions in Spain have been deteriorating and this downgrade should not have been unexpected. Fear is running high and bulls won’t stand in the way of negative news.
The fact that we could only generate one positive day before selling resurfaced is bearish. When snapback rallies are brief, it means that the next down leg is just around the corner.

All eyes are focused on Europe. When the $1 trillion bailout package failed to restore confidence, a clear message was sent. Investors don’t believe the EU can resolve its credit crisis. Debt levels are astronomically high and liberal social programs will keep them running in the red until they default.

Credit spreads measure the willingness banks have to transact business with each other. It is starting to widen out and that is not a good sign. Spreads have reached levels not seen since last November and the trend is concerning.
Over the weekend, we learned that the PMI in Europe declined from April to May. It was the second largest drop ever recorded and economic activity is falling off. China had similar results and their PMI also declined. This is very problematic since China is supposed to pull us all out of this mess. In addition to a credit crisis, traders will be watching for signs of a double dip recession.

This morning, ISM manufacturing was released. It came in at 59.7 versus 60.4 in May. This was a strong reading and it was in line with expectations. Thursday, ISM services will be released. It is an important number since 80% of our economic activity comes from the service sector. It has been strong in recent months and I expect that to continue. The ADP employment index will also be released that day. Many traders discount the importance of the number, but I will be watching it closely. ADP processes payrolls for many large companies and they have their finger on the pulse of private sector employment. Government stimulus is running out and if corporations don’t start rehiring, the unemployment rate will rise.

Friday, the Unemployment Report will be released. Initial jobless claims have been on the rise and the four-week moving average is creeping higher. Analysts are expecting 500,000 new jobs. That would be a fantastic number if we get it. I believe this will be the peak for employment this year. All of the census workers have been hired and job creation from stimulus programs won’t outnumber the layoffs by state and local governments. They are running deep in the red and the need to make cuts to balance budgets.

S&P 500 companies get 25% of their profits from Europe and they will not rehire until this credit crisis passes. That means the private sector won’t pick up the slack. Today, Hewlett Packard announced they are restructuring and they plan to reduce their headcount by 9,000 employees. The cost cuts continue.

Now we have something else to worry about. The credit crisis in Europe will still be the focal point, but traders will also be watching for signs of a “double dip recession”.

Conditions will continue to deteriorate in coming months and the selling will accelerate by the end of summer. The fact that we could not generate a decent rally last week tells me that the upside for this bounce is limited. Under normal conditions, the market should have been able to easily post 3 days of solid buying.

I would like to see the market get to SPY 115. That was major support and now it represents major resistance. If we get a rally of that magnitude, option implied volatilities will decline to a level where we can consider buying puts again. At this juncture, they are pricey and we are giving up too much of an edge.

The market has been able to rally off of its lows this morning. Our economic releases this week should be fairly bullish and I expect to see support. I have been selling out of the money puts on strong stocks that have major support. This strategy has worked very well and premiums are declining quickly. There is still a nice edge in this trade, but it is getting smaller by the hour. If you have not sold put premium, stay on the sidelines and wait for this rally to run its course.

The next big move is down. When we start hitting resistance, sell out of the money call credit spreads. Use the proceeds to purchase long-term far out of the money puts on weak stocks. Future declines will be deeper and the bounces will be smaller. Eventually, we will slip into a full-blown selloff. If you buy out of the money put options that have lots of time before they expire, you will be able to ride out some of the wild moves.

The market has climbed into positive territory and it looks like we might see a small rally today. Look for follow-through the rest of the week, but know that one news item can pull the rug out from under you at any instant. Trade small and wait for signs of resistance. 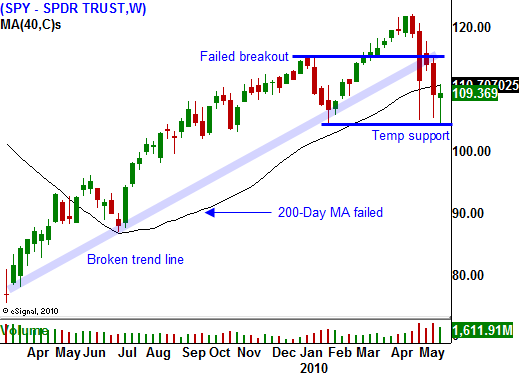