Expect Nervous Trading Ahead of Major Releases This Week!

This is the calm before the storm. Major economic releases will hit the market this week.

The G20 Summit did not produce much in the way of news. The largest nations agreed that debt is spiraling out of control and deficit spending needs to stop. However, there weren’t any resolutions.

Tomorrow, consumer confidence will be released. Analysts are expecting it to drop to 62 from 63.3. This number will have much of an impact. Wednesday, the ADP employment index and Chicago PMI will be released. Analysts are expecting private sector job growth of 61,000 in June. Corporations have been slow to hire and I believe we are set up for disappointment. The Chicago PMI is expected to come out at 59, slightly lower than May’s number. Given the weak Empire Manufacturing number and the weak Philly Fed number, I believe the inventory cycle has run its course and Chicago PMI will come in” light”.

Thursday, initial jobless claims, construction spending, ISM manufacturing and pending home sales will be released. Jobless claims have continued to rise as measured by the four-week moving average. This is likely to spark fear after a bleak ADP number and traders will sell stocks ahead of Friday’s Unemployment Report. Construction spending has been trending lower and last month, ISM manufacturing pulled back from its highs. Home sales were horrible last week, hitting a 40 year low. The economic news this week will raise serious concerns of a double dip recession.

There are only two positives that will influence the market next week. Stocks have tended to rally ahead of earnings season. This pattern might be in trouble and I sense that traders are pricing in weak guidance for Q3. End of month fund buying should also support the market.

If the market rallies ahead of earnings season, stocks will drop quickly once the results are posted. On the other hand, if bad news starts getting priced in now, we will see a steady decline and less whipsawing.

The S&P 500 is below its 200-day moving average. The bounce during quadruple witching was brief and the volume was light. Those gains were easily erased last week. In two weeks, Greece will try to auction €5 billion in short-term bonds. Other PIIGS need to raise cash as well and interest rates have swiftly been moving higher (Spain and Portugal). The threat of a financial crisis in Europe could escalate at any moment.

The likelihood of a decline this week is great. I am buying puts on weak stocks that were not able to rally the market two weeks ago and then have broken technical support. In today’s chart you can see that a head and shoulders pattern has formed. If we break below SPY 105 – BUY PUTS! 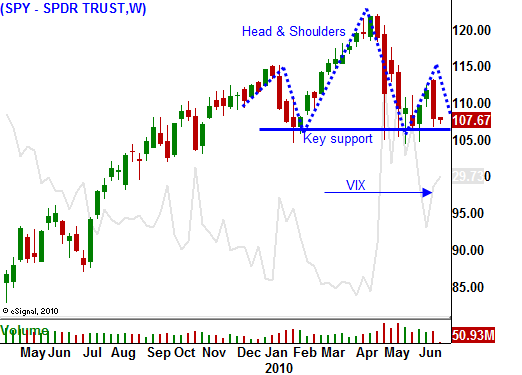