Bearish Momentum and Nervousness Ahead of Economic Releases – Buy Puts!

It has a tough week for the market. After a great start Monday, it dropped 4% throughout the week. The economic news has been dismal and conditions are starting to deteriorate.

Traders were able to discount the poor Unemployment Report three weeks ago. With every new release, the news got worse and fears of a double dip recession surfaced. The Empire Index, the Philly Fed, retail sales, new/existing home sales and durable goods orders disappointed. This morning, the final revision Q1 GDP missed estimates. It fell to 2.7% when analysts expected to stay at 3%.

Next week, many important economic statistics will be released. Consumer confidence, ADP employment, Chicago PMI, initial claims, construction spending, ISM manufacturing, factory orders and the Unemployment Report will be posted. Given the recent trend, I am expecting “soft” numbers.

During the last three quarters, the market has had a tendency to rally ahead of earnings season. If this pattern is going to continue, the market has to get past all of the news next week. The selling pressure has been heavy and I don’t know if that’s possible. The price action feels heavy and I believe traders are starting to price in lackluster guidance for Q3.

This morning, lawmakers reached an agreement on financial reform. There were compromises with regards to derivatives and financial stocks are rallying. I view this as a relief rally that will end soon. Banks are an easy political target and regulations will bite into profits. Financial institutions are still burdened with toxic assets and homeowners are walking away from their properties. There is more pain to come.

The most concerning news this week was barely mentioned. Spain and Portugal held short-term bond auctions and they went poorly. Interest rates shot higher and new capital is coming at a high cost. The PIIGS still have to raise a lot of money in the next few months. The Euro credit risk scene is coming to a boiling point.

I was hoping for one more push higher to SPY 115 and I don’t believe we will get it. Resistance at SPY 112 was too great and last week’s rally was nothing more than program trading and short covering. We are back below the 200-day moving average and good news is almost impossible to find.

Traders will not want to go home long heading into the weekend now that major support has been breached. Major economic releases next week will create nervousness and I expect to see additional selling pressure heading into Friday’s big number.

Buy puts on weak stocks. I expect to see light trading with negative bias into the close. 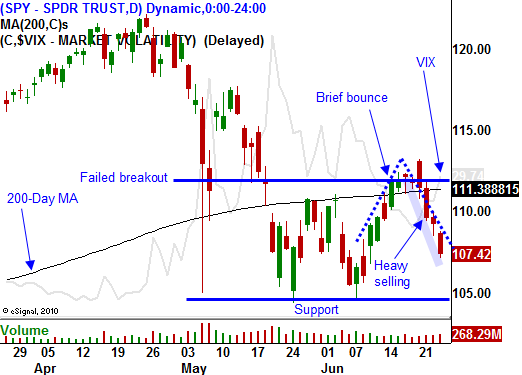