With each passing day, the threat of a double dip recession grows. Economic conditions are deteriorating and traders realize that one country can’t pull the entire world out of a recession.

For weeks I have been saying that bulls would try to buy dips in the early stages of a market transition. The one year uptrend would die hard given that corporate profits are robust and interest rates are low. As the selling pressure mounts, bulls eventually pull their bids and a sustained decline takes out many support levels.

We have reached that juncture. A two-year chart of the S&P 500 shows that a head and shoulders pattern has formed. If we close below SPY 105 today, the neckline will be broken and heavy selling will set in. It is time to buy long-term out of the money puts and I believe this selloff will get very ugly.

This morning, economic news from China rattled the market. A new leading economic indicator (LEI) showed a slowdown. China relies on exports and 25% of their goods go to Europe. The Chinese government senses froth and they want to put the brakes on. They have proposed higher interest rates and a floating Yuan. Both of these actions will slow economic growth. They are sitting on a pile of funny money (Euros and dollars) and they are wisely using these reserves to buy hard assets (resources) in undeveloped countries (Africa).

The ECB has a credit facility for European banks that allows them to borrow at very low rates. That program is being reevaluated and if it is removed, banking liquidity in Europe will suffer. This would accelerate the crisis and it also factors into today’s decline.

The results from Europe’s banking stress test will be released in the second half of July. It is likely to show that banks are adequately capitalized. However, it will reveal how exposed major European banks are to a sovereign default. Most major European banks have lent large amounts of money to PIIGS nations.

Domestically, economic conditions are rolling over. Inventories were drawn down severely last year and that rebuild has run its course. Cash for clunkers, cash for caulkers and high-speed trains to nowhere have done little to stimulate job growth. The government spent an incredible amount of money on tax rebates. People saved that money and it did not find its way back into the economy. Unemployment benefits have been extended many times and if anything, that has added to the problem by taking away the urgency of finding work.

The government is also subsidized housing. It has purchased more than half of the mortgages in the last 18 months. This has kept interest rates low so that homes are affordable. Unfortunately, the government has been subsidizing housing for more than a decade and people that don’t deserve a home are living in one. Only houses that are less than $300,000 have been moving nationwide. Banks are starting to foreclose and the write downs will be massive as the problem spreads to prime loans.

I have been saying for months that the Fannie Mae and Freddie Mac problem will dwarf TARP. All we’ve heard about in recent months is how banks have repaid 75% of the $285 million that was extended by the government. Many banks did not want the money and they did not need the money. They were forced to take it and they repaid it with penalties as soon as they could. What you don’t hear from the government is that the Fannie Mae/Freddie Mac bailout could cost taxpayers $1 trillion.

If I sound bitter, I am. People want the government to take care of all of their problems. They don’t want to take any responsibility themselves. If we all lived within our means and saved for lean times, we would be much better off. That means driving older cars, taking fewer vacations and putting money aside for our retirement. When we fail to do so, we want to blame everyone else.

If my kids are stupid, I blame the education system. If I’m obese, I blame McDonald’s. I don’t exercise; I complain that pharmaceutical companies charge too much for blood pressure medicine. If I spend all of my money, I expect the government to take care of me in my golden years. If I lose my job, I blame the Chinese because they are smarter and work harder.

The bottom line is that our success has made us fat and lazy. We don’t want to fight to preserve our way of life; we just expect it to continue. No one will vote for a President that runs on a platform of hard work and sacrifice, so we continue down this dark path.

I consider all of you to be a cut above the rest and my statements don’t apply to most of you. I’m not happy with what I see unfolding, but I am paid to forecast the future based on my experience and education. We are headed for deep trouble. Get your finances in order and pay off debt. I prefer shorting the market to buying hard assets like gold. When the shit hits the fan, everything will lose value. After the market bottoms, cash in your shorts and get liquid. You can then convert to gold if you would like at much lower prices.

BUY PUTS NOW. WE ARE GOING TO CLOSE BELOW SPY 105. Go far out in time and far out of the money. Be prepared to hold these positions for at least a few months. 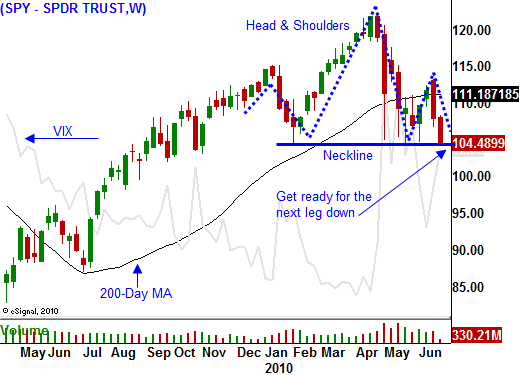