Yesterday, the market staged an impressive rally after State Street Bank (STT) said that earnings will beat expectations. The entire financial sector surged higher and the rest of the market followed. Once we broke above SPY 105, a massive short covering rally ensued.

From a technical standpoint, yesterday’s close above SPY 105 has to be respected. The market was oversold and bearish sentiment needed to be kept in check. The greatest threat to the market is a sovereign failure in Europe and we don’t have one – yet.

PIIGS nations will be holding bond auctions in coming weeks, but this scene is quiet now. That gives bulls an opportunity to flex their muscles. Remember, Spain experienced a 70 basis point spike two weeks ago when it held a short-term bond auction and Portugal’s rates spiked 100 basis points. Until we see a sovereign failure, bulls will point to good earnings, strong balance sheets and low interest rates.

The Committee of European Banking Supervisors (CEBS) outlined their guidelines for the banking stress test. The market seemed receptive to the pending disclosure, I am not as optimistic. The tests will reveal some losses taken on government bonds, but the details will be very limited. We will know the extent of the write-downs, but we will not know how much sovereign debt these banks are holding. That is the critical question that needs to be answered.

Stocks have tended to rally into earnings and I was a little surprised to see traders start pricing in weak Q3 guidance a week ago. I believe earnings will be good and forecasts will be cautious. This news will not necessarily spark a major decline since corporations tend to under promise and over deliver.

The key to the next big decline will be deteriorating economic statistics and rising interest rates in PIIGS nations. Unemployment, ISM manufacturing, ISM services, durable goods orders, GDP, Philly Fed and the Empire Index all weakened recently. This morning, retailers reported same-store sales and they were fairly light. By the end of August, economic conditions will worsen. As for European interest rates, that spike could come at any time. Greece is projected to test those waters next week when it tries to auction €5 billion in debt.

The technicals and fundamentals both point lower. This rally will run its course over the next two weeks and it will stall. The next wave of selling will break support at SPY 105 and we will make a new relative low.

Until we actually have a sovereign failure, expect the market to move two steps lower and one step higher. Eventually, other EU members will request financial aid. Stronger nations will recognize the magnitude of the problem and they will step aside knowing that they can’t bail everyone out. That is when sustained selling will set in.

On a longer-term basis, I am looking for a big drop from late August through mid-October. Then we should get a mini year-end rally. Republicans will win elections and that will be good for the market. That rally won’t last long and we should start 2011 off on a negative note. Federal, state and municipal tax hikes will bite heavily into discretionary spending.

We have excellent gains in our bearish positions and it is time to take profits. Let’s see how high this bounce can take us. I believe the market will hit resistance before SPY 110. I am going to cash and I will patiently wait for selling pressure. If we close below SPY 105, get back into your short positions. 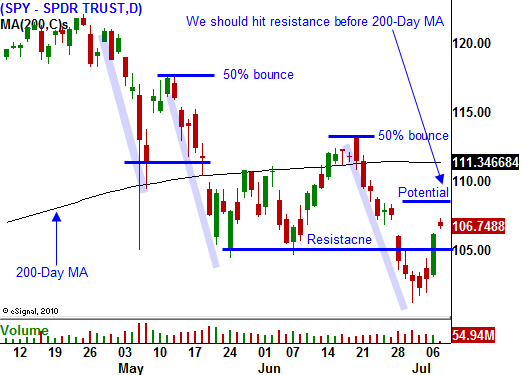