The Market Should Stage A Small Rally This Week. Wait for Signs of Resistance!

Last week, the market staged an impressive rally and it rose above resistance at SPY 105. Shorts scrambled to cover their positions and the squeeze was on.

Pessimism was a bit ahead of itself and poor earnings guidance was priced into the market. When State Street and J.P. Morgan Chase made positive comments, the market rebounded sharply. The economic news was not very bullish, but the market ignored deteriorating statistics.

This week, there will be important news from many different sources. Earnings season will kick off this afternoon and Alcoa will release results. Tomorrow, Intel will set the tone for technology stocks. During the middle of the week, earnings quiet down. However, Google will release earnings Thursday and Bank of America, Citigroup and General Electric will announce Friday morning. I am expecting good results from Intel and tech stocks should do well this week. Bank results will be mixed and financials have already rallied off of their lows. They still have a little upside and that will come when regional banks post the numbers in two weeks.

The economic calendar is fairly heavy this week. Trade balance, retail sales, business inventories, initial claims, PPI, Empire Manufacturing, industrial production, Philly Fed, CPI and consumer sentiment will be released. Manufacturing statistics deteriorated last month and I am expecting the same. The inventory cycle has run its course and last week we saw wholesale inventories rise. Inflation will not be an issue. All told, the economic releases should have a slightly negative bias.

On Wednesday, the FOMC will release its statement. I don’t believe that their rhetoric will change and this should be a nonevent.

Greece will be auctioning bonds this week. They had planned on selling €2.3 billion in one year notes, but they had to reduce the maturity by six months due to the high cost of capital. Over the weekend, the ECB said it would provide €10 billion in aid to Greek banks. This temporary fix should boost confidence for a few weeks.

In the last three quarters, stocks have rallied into earnings. I believe they have declined to a point where a small rally can unfold during the week. However, this will be short lived. Resistance should start kicking in around SPY 110. I do not believe that we will rally through SPY 112 before heavy selling sets in.

The market is forward-looking and it will notice the slowdown in economic activity. By the middle of August, expect weakness to return and the market will make a new relative low in September.

Option expiration could also be a factor this week. If bulls can keep the momentum going, buy programs could kick in.

From a trading standpoint, I am sidelined. I closed most of my bearish positions last week and I will wait for this rally to stall. The VIX has dropped down to the mid 20’s and I would be willing to buy options in the low 20’s. If stock prices firm up this week, we could see option implied volatilities drop to that level.

I like being on the sidelines right now. Be patient and wait for a decline. Watch for a tech rally after Intel’s number. I believe the market has a little bit more upside and we are likely to see it this week. 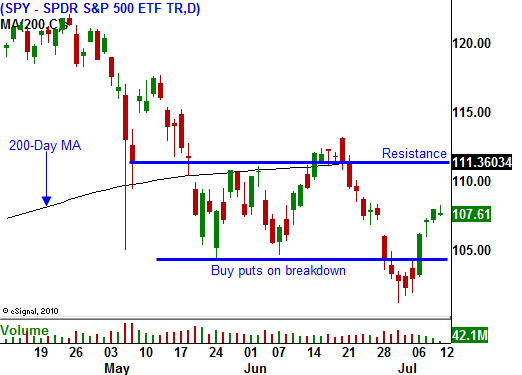