Light Volume Markets Can Destroy Short Positions. Take Some Profits On A Close Above SPY 105!

Yesterday, the market staged a nice rally after stocks in Europe rebounded. There was optimism that the banking stress test would calm nerves. The parameters for the study will be released tomorrow.

After a nice initial surge, the market gradually drifted lower and a 16-point S&P 500 rally was erased. After a brief stint in negative territory, the market was able to rally into the close. The price action was typical of light holiday trading. Bulls tried to get something going and bears flexed their muscles once the highs were in.

This morning, State Street Bank announced that they will beat earnings estimates. The market had been bracing itself for dismal results and financial stocks took off. In a separate report, credit card defaults declined. Much like yesterday, the initial rally has hit resistance. If bulls can’t add to gains, expect selling pressure late in the day.

Tomorrow, initial jobless claims will be released. They have been trending higher and a number above 460,000 will spark a light round of selling.

There isn’t much news to drive the market this week and this is the calm before the storm. Earnings season kicks off next week and it will be the focal point for the rest of July. Profits should be excellent, but guidance could be weak. If the market is able to generate a small rally into the releases, it will be poised to decline late in July.

From a fundamental standpoint, the market could rally on the stress test results. Traders feel that European banks have been reluctant to write down assets. If they have “taken their lumps” a relief rally will ensue. I still feel there is plenty of room for manipulation. US banks did not want to take write-downs and FASB rule changes allowed them to mark-to-model instead of mark-to-market. Many real estate assets are ill-liquid and they are tough to price. Banks are still sitting on a heap of toxic assets.

The real point of interest from my perspective is the banking exposure to PIIGS investments. The balance sheets will reveal the risk associated with a sovereign default.

PIIGS nations still have large auctions in the next few months and that could be a quick catalyst for the next decline. Remember, Spain’s short-term interest rates spiked 70 basis points two weeks ago and Portugal’s shot up by 100 basis points.

In the weekly chart you can see that a head and shoulders pattern has formed. We are below the neckline and the 200-day moving average. This selloff feels like it is a little ahead of schedule. We still needed more time for conditions to deteriorate. The technicals are weak and a major decline lies ahead.

I have excellent profits in my short positions and if the SPY closes above 105, I will take profits. The price action this afternoon will be critical. I am expecting weakness and I want to see bears slapped this rally back down.

Light volume markets can be very damaging for shorts. There is an old market adage, “never short a quiet market”. Tread carefully and don’t be afraid to take profits on bearish positions. If you have purchased longer-term out of the money puts, consider selling some front month put premium against those positions if the SPY closes above 105. Otherwise, stay the course knowing that a big decline looms in coming months. 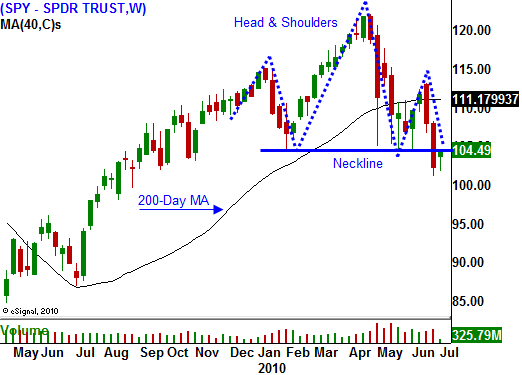