Lack of Economic News and Decent Euro Bond Auctions Should Float the Market This Week.

This week, the economic news is fairly light and that should bode well for the market. Conditions are deteriorating and fears of a double dip recession have surfaced, but that is an issue for next week.

The other news that had the potential to weigh on the market this week is the European credit crisis. Surprisingly, those bond auctions went very well and in some instances, yields actually dropped. Spain sold €6 billion worth of 12 to 18 month T-bills. The average yield fell from 2.3% down to 2.2%. The bid to cover also increased from 1.5 to 1.95 showing strong demand. Ireland successfully sold €1.5 billion worth of bonds after Moody’s downgraded it yesterday. Yields on the 10 year bond rose to 5.54% from 4.7%. Ireland has covered its funding needs through the first half of 2011. Last week, Portugal and Italy successfully sold bonds.

I don’t want to paint a rosy picture for Europe. The PIIGS needed to raise funds and they have been able to albeit at higher rates. For the time being, the European credit crisis should not weigh heavily on the market.

Today, China said that the export outlook for Europe looks grim. Austerity programs in the EU and tighter monetary policy in Brazil and India will reduce demand. The rest of the world is counting on China to pull us out of this recession and any signs of an economic slowdown will force investors out of the market.

For the rest of the week, I expect earnings to be the focal point. Tech is the strong sector and Texas Instruments released excellent results last night. On the other hand, IBM missed on the top line and the stock is trading lower. If this market has any chance for a rally, it has to be led by the tech sector. After the close, Seagate will release earnings and they should be good. Apple also releases earnings after the close and results should be excellent. The issues it’s had with the new phone should not be reflected in these numbers.

Bank stocks (JPM, BAC, C, STT, ZION and Goldman Sachs) are all trading lower after releasing earnings. Top line growth has been dismal and that will only get worse once the financial reform bill is implemented. Write-downs are decreasing, but that should worsen as employment conditions deteriorate. By the end of this week, the major financials and some of the regionals will be behind us. Before tomorrow’s open, Morgan Stanley, U.S. Bancorp and Wells Fargo will post results.

After an early decline, prices have stabilized today. I believe most of the bad news is “baked in” and the market should be able to grind higher the rest of the week. Towards the second half of earnings season, guidance should weaken and that will weigh on stocks. Economic releases during the last week of July and the first week of August will also dampened spirits. This is when I expect support at SPY 105 to be tested.

If you feel the need to trade, look for stocks that have significant overhead resistance and sell out of the money call credit spreads once earnings have been released. Stocks that merely meet estimates are likely to decline. Trading usually slows down late in July and early in August. That is another reason to sell call credit spreads.

I still feel that we are setting up for a decline in late August/September and this is the calm before the storm. Be patient.

If the market breaks below SPY 105, buy puts. That is a standing set of instructions. 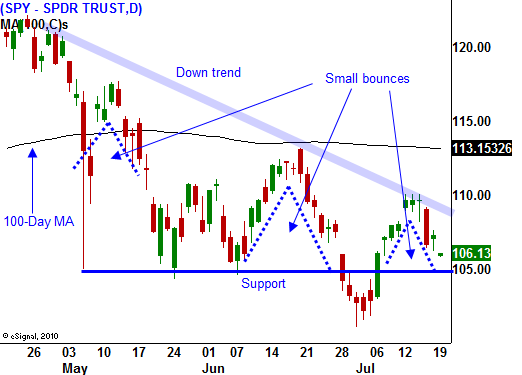