Let The Rally Play Out – Economic News Will Start To Weigh On The Market Next Week!

This week, a light economic calendar and decent European bond auctions allowed the market to focus on earnings. Those two dark clouds will reappear shortly.

Economic conditions are gradually deteriorating and fears of a double dip recession have surfaced. Next week, new home sales, consumer confidence, durable goods orders, initial claims, the Beige Book, Q2 GDP, Chicago PMI and consumer sentiment will be released. In two weeks, ISM manufacturing, factory orders, ADP employment index, ISM services, initial claims and the Unemployment Report will be released. This will be a minefield for the market to wade through and I believe prices will weaken.

A week ago, the Fed lowered its forecast for 2010 GDP. That theme was reiterated yesterday when Chairman Bernanke testified before the Senate banking committee. Conditions are weaker than the Fed has originally forecasted. The market did not like what it heard and the S&P 500 dropped 15 points.

This morning, initial claims jumped right back up to 464,000. Last week’s number was inaccurate due to seasonal adjustments that distorted the picture. The market was already prepared for today’s snap back.

Bond auctions in Europe are critical and I monitor them closely. This was a good week for the PIIGS and they were able to raise money. Ireland secured what it needs through the first half of 2011. Spain auctioned €5 billion worth of bonds at slightly higher rates and Italy successfully held auctions last week. Realize that these winds can and will change at a moment’s notice.

Last week, Portugal successfully held bond auctions. Yesterday, it sold €1.25 billion in 12 month treasury bills and the yield more than doubled as demand crumbled. Hungary walked away from IMF talks this week when officials said that they aren’t doing enough to cut budget deficits. Any number of small peripheral countries like Latvia, Bulgaria, Hungary or Romania could default in an instant. These “minor failures” will eventually mark the beginning of the end for the EU. For now, these seas are calm and they won’t stand in the market’s way.

This morning, the euro zone reported a better-than-expected Purchasing Manager’s Index (PMI). That has stocks moving higher and there is optimism that the “stress test” will show that European banks are in decent shape when the results are released tomorrow. I don’t share that sentiment, I still believe that the stress test lacks transparency and these banks have tremendous sovereign debt exposure.

Earnings have been good. That is fairly typical during the first two weeks since some of the strongest companies report early. Financial stocks were priced for disaster and good news from Morgan Stanley, U.S. Bancorp and Wells Fargo sparked a rally in the financial sector yesterday.

With each passing week, the earnings will start to weigh on the market. Guidance from cyclicals, retail, energy and health care will take their toll. The last three quarters, stocks have rallied into the first two weeks of earnings and then they have declined. Each subsequent decline has been more severe than the previous one. With a heavy economic calendar coming up next week, I am expecting to see this bounce fail.

First resistance is at SPY 110. That is the downtrend line from May. Given this morning’s strength, we could possibly break through that level in the next three days. Although there is minor resistance at SPY 112, the really big level to watch is SPY 115. I believe that will hold and we will see the start of the next major decline before it is tested.

I am limiting my positions at this stage. As the market rallies, I am selling out of the money call spreads on stocks that have not moved higher after earnings. I also want to see significant overhead resistance. This strategy will simply generate a little income while I wait. The higher the market moves, the better my entry point for put positions. Also, option implied volatilities will decline. I would like to see the VIX in the low 20’s.

Be patient and let this last wave of buying play out. Scale into longer term out of the money put positions and hanker down. When the market rolls over, it will happen quickly. Option premiums will explode and the bid/ask spreads will widen out making it tough to enter positions. 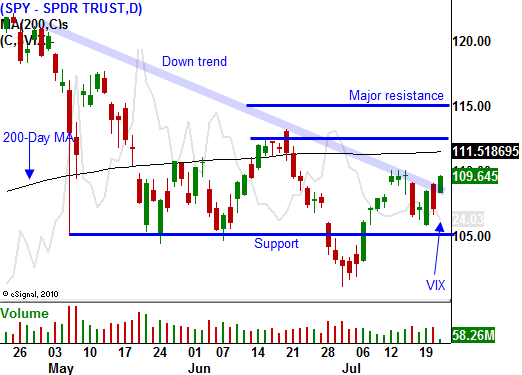