All Eyes Are On the Euro Stress Test Results. They Will Be Released At 12:00 pm EST

After a huge run-up yesterday, the markets are fairly quiet this morning. Earnings came out pretty much as expected and gainers and losers have balanced each other out. The S&P 500 futures are unchanged 20 minutes into trading.

Cyclical stocks led the rally yesterday after 3M, UPS and Caterpillar posted solid numbers. The earnings for Monday are fairly light and so is the economic calendar. For now, the market is clearly focused on the European bank “stress test”.

That news will start to hit the market at 12 o’clock EST. That is when European markets close and traders will have the weekend to review the results. Personally, I believe the results will be good, but a lack of transparency will leave traders wanting more information. This process was designed to restore confidence and I doubt it will accomplish that objective.

We still won’t know how much risk exposure banks have two sovereign debt defaults. Other analysts are questioning the degree to which assets are truly been written down. Banks know that if they dramatically write down assets, they might have difficulty attracting capital in the future.

We are entering the third week of earnings and although the results have been excellent, the strongest companies have released. The quality of earnings will start to decline after this week and Q3 guidance will weigh on the market.

Next week, the economic calendar is very “heavy” and that will also pressure stocks. Economic conditions have gradually deteriorated and that was echoed by the Fed. They lowered 201 GDP estimates in their FOMC statement and that theme was reiterated this week by Chairman Bernanke.

This rally might have a few more up days left in it, but I believe the headwinds will start blowing as we approach SPY 112. With each passing day, the action should get heavier.

Watch the financials after 12:00. They have helped to push the market higher this week and if traders don’t like what they hear from Europe, those gains could quickly be erased.

I want to get short, but this is a little early. Try selling some out of the money call credit spreads on stocks that have released earnings and have failed to rally. Sell these spreads above a heavy resistance level. That will provide you with some protection in case the market does move higher. 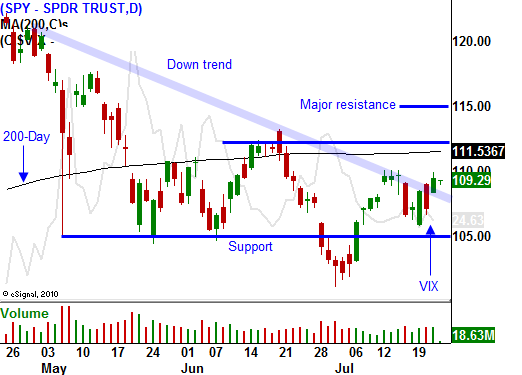