Let This Rally Run. Watch For Signs of Resistance Near SPY 115 or Earlier!

Yesterday, the market convincingly broke through resistance at SPY 110 and it closed right at the 200-day moving average. Earnings have been excellent and we have had a reprieve from Euro credit crisis and from economic releases.

This morning, DuPont blew away estimates and we have another cyclical stock that is marching higher and giving good guidance. FedEx raised its forecast yesterday and described improving transportation activity. Bulls have the ball and they are running with it. Interest rates are low and stock valuations are reasonable so Asset Managers are putting money back into equities.

From a return standpoint, Asset Managers are not overly concerned with losses. Their objective is to outperform the market. If the market is down 10% and their portfolios only lose 8%, they are satisfied. Investors don’t see things the same way and they are staying out of the market because they don’t like the risk profile.

European credit concerns are on the back burner. PIIGS bond auctions have gone well and these countries have been able to raise capital. Some of the yields have even declined slightly in the last few days. I will not get lulled into this trap. These countries are perilously close to default and austerity programs have not remotely addressed the major issues that got them into this mess. Budgets are not balanced; the huge deficits for 2011 will just be a little smaller than they were this year.

The banking stress test assumed that there would not be any sovereign defaults. In that context, Deutsche Bank looks brilliant. They released earnings this morning and they were much better than expected. That has European stocks trading higher. This reminds me of Countrywide and Washington Mutual in 2007. They were making fantastic money on all of their crappy loans and we know how that ended. This whole stress test was nothing more than an exercise in public relations. For now, it is working and nerves have been calmed.

The economic news this morning looked encouraging on the surface. Home prices rose .5% (more than expected), but they are still benefiting from the last-minute rush in April to lock in first-time home buyer tax credits that were expiring. New home sales surged 24% in June, but the number of homes sold was still at the lowest level since 1963. It is critical to rip these numbers apart because they can be very misleading.

Consumer confidence also came out this morning and it fell to its lowest level since February. Unemployment benefits and severance packages are running out and people don’t see any improvement. This will reduce consumption, the engine that drives 70% of our economy.

State and local governments are preparing their budgets for 2011 and even though revenues are increasing slightly, the budget deficits are huge. States are collectively $300 billion in the red and forecasts show that they will overspend by $84 billion next year. Politicians can’t control spending and the problem continues to spiral out of control. Elected officials will take the easy way out and prostitution, gambling and pot will all be legalized soon to increase revenues.

India, Australia, Korea, Indonesia, Norway and Canada have all raised interest rates. Inflation is a concern in Asia and interest rates are likely to move higher. On a risk/reward basis, these sovereign bonds are starting to look more attractive and that will put upward pressure on PIIGS/US interest rates.

Good earnings news is getting priced into stocks. When the economic releases heat up in the next few days, cold water will be splashed on the market. I believe the Beige Book tomorrow afternoon and Chicago PMI/consumer sentiment on Friday will dampen spirits. Next week, ISM manufacturing should weigh on the market Monday morning. A large part of our economic rebound was due to an inventory rebuild and supplies have been replenished. Wholesale inventories are on the rise and demand has not returned.

I don’t want to stand in the way of this rally. Quiet markets can be lethal for bearish positions. If I miss making money on the upside, I am not going to sweat it. I will simply view this as an opportunity to enter bearish positions at much better prices in coming weeks. If we are able to close above SPY 112, I will raise my entry point for put purchases. If this happens and we break back below SPY 112, I will buy puts.

Look for choppy trading today. We are right at the 200-day MA and there is not much news to drive this market either way today. 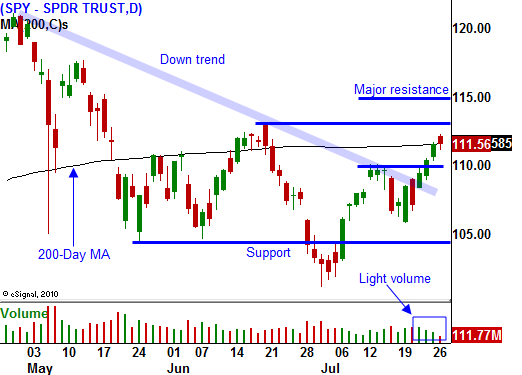