This week, the market is taking a break after one of the best months ever. Stocks rebounded sharply ahead of earnings and a continued to move higher once the releases started. Some of the strongest companies report early and great earnings news is now “baked in” for those who are about to post numbers. During the last three quarters, stocks have retreated during the second half of earnings season. We are at that juncture now and weak economic news will add to the selling pressure.

As I mentioned in yesterday’s comments, the Beige Book would weigh on the market and we would see selling late in the day. The report was dismal and it showed that manufacturing has slowed in the Midwest and Northeast. Retailers state that consumers are focusing on “necessities”. Housing has been very weak and there are not any signs of improvement. The Fed warned us that economic conditions were slowing down and they lower their 2010 GDP forecast two weeks ago.

Tomorrow, the first estimate for Q2 GDP will be released. Analysts are expecting a 2.5% growth rate. I believe the number will hit that target and the market will take it in stride. In coming months, it is likely to be revised lower. That has been the pattern for three straight quarters. Consumer sentiment will also be released after the open tomorrow and that has a chance to disappoint the market. Job conditions are not improving and unemployment benefits/severance packages are running out. Consumption accounts for 70% of our GDP and if people stop spending, the economy will contract.

Two huge pieces of information will impact trading Monday morning. Before the market opens, China will release its PMI. Some analysts (not the consensus) feel that we might see a number below 50. That would indicate economic contraction and the market would have a very negative reaction. All hopes of a recovery are tied to strength in China. That news will set us up for a decline Monday morning and then ISM manufacturing will be released 30 minutes after the open. I believe this number will also be weak and the selloff will gain momentum.

ISM manufacturing, the Empire Index, the Philly Fed and Chicago PMI have all rolled over in recent months. Much of our economic recovery can be attributed to an inventory rebuild and that cycle has run its course. We saw that a few weeks ago when wholesale inventories climbed. Supplies are up and sales are down.

As next week unfolds, all eyes will be fixed on the Unemployment Report. The ADP index will be released Wednesday and it will reflect the job scene in the private sector. Consensus estimates are looking for an increase of 30,000. This would actually be a good number but it has room to disappoint on the downside. Public sector jobs will start declining. Census workers are getting laid off and state/local governments are cutting payrolls.

I read a study this morning that estimates payroll cuts in local governments to increase by more than 400,000 workers in the next two years. Municipalities are running out of money and property tax delinquencies are on the rise. States are preparing budgets for 2011 and collectively they project running $84 billion further into the red next year. That will pressure them to make tough cuts right now.

Bulls have been uncontested in recent weeks. PIIGS bond auctions have gone well and the banking stress test (although a joke) soothed nerves. There have also been very few economic releases to stand in the way of this rally. Bearish pessimism got ahead of itself when support was broken and shorts were forced to cover when the market bounced. These snapback rallies are very common in the early stages of a market transition. By next year, these rallies will be less severe and it will be obvious that we are slipping into a double dip recession.

I still feel we will have a nasty decline from mid-August through mid-October and SPY 100 will fail. That will set us up for a year-end rally. November elections will favor Republicans and that will be “market friendly”.

We are at a juncture in the earnings cycle were stocks start to sell off after announcing. That has happened the last three quarters and I expect it to happen again. The rally this morning is fading quickly and we are likely to test the downside today. End-of-month fund buying has not been strong enough to push this market higher today.

I am taking next week off before my kids go back to school and my intent is not to turn my computer screen on. I will post early comments to recap today’s action, but that will be the last of my comments for a week. I feel that it is still too early to get aggressively bearish. August can be a very slow month and quiet trading normally favors the bulls.

If you are long the market, I would suggest taking profits ahead of Monday. The Chinese PMI could be a real spoiler. If I were trading, I would probably sell some call credit spreads on steel stocks. The market did not like the earnings and these stocks are already weak. Bad news from China would weigh heavily on them.

The economic news won’t be disastrous next week, but it will provide a stiff headwind for this rally. The longer the 200-Day MA holds, the stronger that resistance level becomes.

If by chance the market trades below SPY 105 – get short.

Keep your size small and get ready for better trading towards the middle of August. 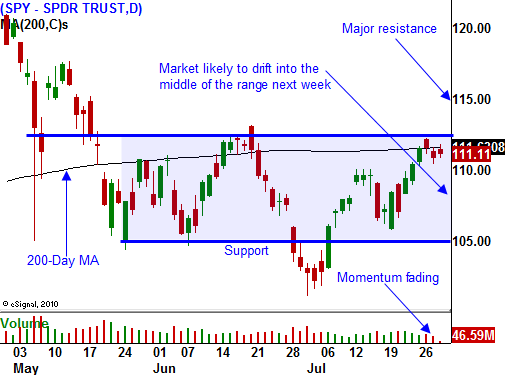