The Market Feels Heavy and SPY 105 Could Be Tested Soon!

I will not be posting market comments from August 2nd – 6th.

Thursday, stocks retreated early in the day. The biggest news came from Colgate and Kellogg. Consumers are “trading down” to cheaper products and this has broad-based market implications.

We have already seen deteriorating retail sales numbers and stores are reporting that consumers are focusing on necessities. Over 70% of our GDP is derived from spending and Americans are tightening their belts.

I am writing this report before the GDP number has been released, but I believe it will come in at 2.5%. As we have seen in the last three quarters, it will probably be revised lower. Consequently, I don’t think it will have much of an impact. Consumer sentiment will be released 30 minutes after the open and given the purchasing trends from CL and K, this number has a real chance to disappoint the market.

Chicago PMI will also be released 30 minutes after the open. The Beige Book showed signs of weakness in the Midwest and this number also has a chance to disappoint.

The market feels very heavy. After the close Thursday, NVIDIA warned that it would miss estimates and Google said that its searches don’t work in China. These two news items could weigh on tech stocks Friday.

The longer the 200-day moving average stays intact, the stronger that resistance level becomes. We have reached a juncture during earnings season were stocks typically roll over. This has happened the prior three quarters and it feels like it’s going to happen again.

I believe that the market will pull back Friday and into next week. You can see that Thursday’s volume picked up on a down day and that is a bearish sign. Monday will get ugly if China’s PMI comes in under 50.

There is a chance that SPY 105 will get tested next week, but I am expecting that level to hold. 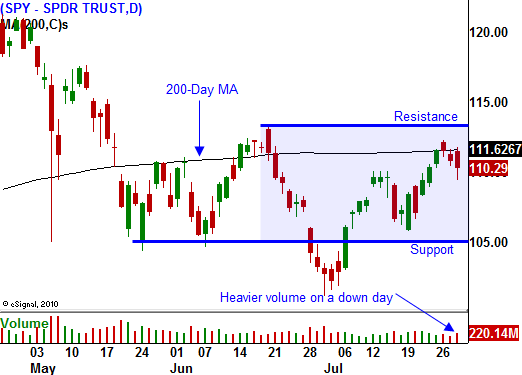