The Calm Before The Storm – Two Weeks Of Lackluster Trading!

Last week, the market backed off from resistance at SPY 113 and the upward momentum from July was stopped dead in its tracks. Economic conditions in China are starting to weaken and that weighed on the market.

Conditions in the US are also deteriorating. Back-to-back initial jobless claims numbers were much higher than expected. The four-week moving average is on the rise and that does not bode well for August’s employment report.

The Fed lowered its GDP forecast for 2010. In its FOMC statement last week it reiterated that challenging conditions lie ahead. Most economic indicators are rolling over and signs of a double dip recession have surfaced.

Cisco has been a tech leader and its CEO has been extremely optimistic about the economy. Last week, he did a 180 and he is not so sure about the upcoming quarter. John Chambers said that conditions have never been harder to predict. The market declined after those comments on concerns that the outlook has changed suddenly.

Earnings season is starting to wind down and the strongest companies have reported. Retailers will dominate the scene this week and based on last week’s price action, the results are likely to disappoint. Kohl’s, Nordstrom’s and JC Penney’s all declined after posting earnings.

The economic news this week is very light and traders are taking time off before their kids go back to school. This means the market will be very quiet.

With each passing week, the selling pressure will increase. During this quiet period, start scaling in to October put positions. Things will heat up two weeks from now. China will release its PMI and I’m expecting it to fall below 50 (economic contraction). That week will also contain major economic releases and they have weighed on the market. We will also be entering a seasonally weak period for stocks.

Be patient and gradually scale into put positions. Quiet markets usually favor the bulls and there is a good chance that stocks will move higher. That will provide a good entry point for put purchases. Expect boring trading the next two weeks. 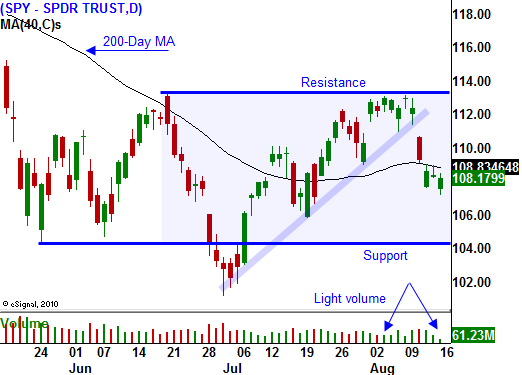