Quiet trading tends to favor the bulls. The next two weeks are very light from an earnings/economic standpoint and the market will be searching for news to trade off of.

This morning, bond auctions in Ireland and Spain went well. That set a bullish tone in Europe and it spilled over to our markets this morning. Advancers outnumber decliners by 2 to 1 and a “fluffy little rally” has emerged. The volume is anemic and the conviction level is low.

Wal-Mart beat earnings estimates by a penny, but revenues fell short. The stock is up on international sales. Many retailers will be releasing earnings this week and they should weigh on the market. The guidance for next quarter has been weak for department stores.

BHP made a takeover bid for Potash. That has all commodity stocks moving higher. They only bid 16% above the closing price and Potash promptly rejected the offer. It is likely that the bid will be raised.

Housing starts and building permits were expected to be weak and the market did not react much after the releases. PPI rose a bit more than expected and it also did not have much of an impact.

Initial jobless claims will be the biggest number of the week and it will be released on Thursday. Another number above 470,000 would raise serious concerns about employment.

Today’s rally has a very consistent feel to it and it is being fueled by option expiration. Buy programs are kicking in now that we are back above the 200-day moving average. The VIX is dropping and that bodes well for option buyers.

I have been scaling into longer-term put positions and I welcome this rally. Now, I will have an opportunity to buy puts at better prices. This rally could continue on light volume in the absence of material news.

Economic conditions have been deteriorating and major releases are two weeks away. The conditions are favorable for a decline during the last week of August. That momentum should carry right into the weakest seasonal period of the year.

Be patient and scale into October out of the money put positions. A big intraday reversal in the next week will signal heavy selling pressure and I expect to see it as we get closer to SPY 113. 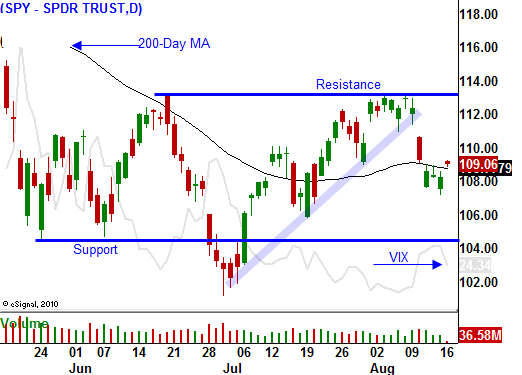