The Fireworks Are 2 Weeks Away – Start Buying October Out of the Money Puts!

Yesterday, the market drifted higher on very light volume. Bond auctions in Ireland and Spain went fairly well and European markets rallied in the absence of other news. For the time being, fears of a Euro credit crisis have subsided. The overseas buying spilled over to our market and option expiration helped to push prices higher.

BHP made a hostile bid for POT and that had all commodity stocks trading higher. That also helped to fuel the rally.
In today’s chart, you can see that we are stuck right in the middle of the range. The VIX is declining and volume is anemic. Yesterday’s rally felt nice, but there was a low level of conviction. Unfortunately, quiet trading lies ahead for the next two weeks.

The biggest economic release of the week is initial claims tomorrow. Two weeks ago, it jumped to 479,000. Traders dismissed that as a “one-off” event. Last week, jobless claims rose to 484,000. These numbers are concerning and a third bad number tomorrow would weigh on the market. Consensus estimates call for 475,000 new claims. If that materializes, we can expect a dismal Unemployment Report in two weeks.

Fears of a double dip recession are starting to surface. Economic conditions are deteriorating. Friday, we will get LEI and the Philly Fed. There simply isn’t much else to trade off of and these two numbers could generate selling pressure.

Next week’s economic releases include durable goods, new and existing home sales, initial claims, GDP and consumer sentiment. Durable goods orders have declined 2 consecutive months. This is a volatile number and it tends to be taken with a grain of salt. GDP came in at 2.4% last month and analysts estimate that it will be revised down to 1.4%. I’m not expecting fireworks off of the economic releases next week. However, in light volume anything can happen.

The big news will hit the market just before the Labor Day weekend (two weeks from now). Monday morning, China will release its PMI. It has been steadily declining the last three months and I believe it will fall below 50 this month. It came in at 51.2 last month. The world is counting on China to pull us out of this recession and a number below 50 would indicate economic contraction. This news will elevate fear ahead of major US economic releases.

In July, private sector employment grew more than expected and the ADP report will give us an early peek at August’s number. The only positive in July’s unemployment number was corporate hiring. I believe that was a temporary blip that will be reversed this month. Companies are very uncertain about the next quarter and the guidance has been cautious. This is not the type of environment where businesses will go on a hiring spree. They have worked hard to trim payrolls and they will not add overhead unless demand picks up.

Public-sector employment declined rapidly in July. Census workers were laid off and state/local governments cut payrolls to balance budgets. June’s employment was trimmed by 100,000 and that was a huge revision. States are preparing budgets for 2011 and they are projecting an $84 billion shortfall. They are already $300 billion in the hole and they will be aggressively cutting expenses now. That means public sector employment will continue to fall the rest of the year. Given the trend in initial claims, I believe August’s employment will disappoint.

All of these economic releases will hit the market just as it enters the weakest seasonal period of the year. I am expecting a substantial decline and I believe the lows from June will be tested.

Retailers are posting results this week and most stocks have declined after the release. Earnings are decent, but the guidance is weak. Consumers are “tapped out” and they are not spending. Over 70% of our GDP comes from spending and this trend will stall the recovery. Most of our activity during the last year can be attributed to an inventory rebuild and now that has run its course. Wholesale inventories are on the rise due to a fall off in sales.

Quiet markets tend to favor the bulls. I have been buying out of the money October puts and I hope we rally a little more so that I can buy puts cheaper during the next two weeks. Option implied volatilities have declined and that is also helping.

Yesterday’s rally seemed very contrived and I don’t believe we will see much of a move one way or the other today. The early action has been soft and I would not be surprised if some of yesterday’s gains are taken back today. 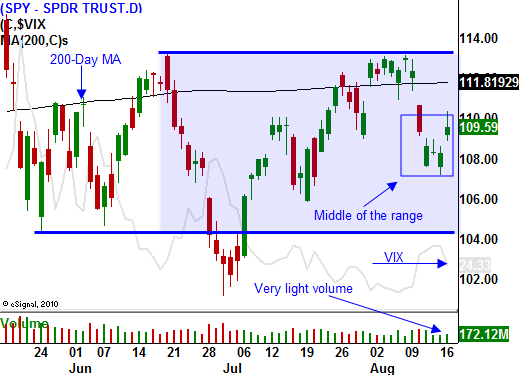