This morning, the market was set for a rally. The S&P 500 was up seven points in pre-open trading. News that Intel was buying McAfee added fuel to overnight strength in Asian markets.

An hour before the market opened, initial jobless claims were released. Analysts expected 480,000 new claims and they jumped to 500,000. This is the highest level since November 2009. Surprisingly, the market took the number in stride and it rallied on the open. This suggests a very strong bid to stocks and as a bear; this resilience is a little concerning.

At 10:00 AM Eastern, the Philly Fed was released. The consensus was looking for 7.5 and it came in at a negative 7.7. That is a huge miss and it signals a dramatic fall-off in economic activity. This is exactly what I have been forecasting.

The economic recovery during the last year can largely be attributed to an inventory cycle. Supplies have been rebuilt and wholesale inventories are rising as sales decline. This will weigh on manufacturing and eventually the service sector will be impacted.

Much of the job growth in the service sector has been tied to retail and restaurants. Those are low-quality jobs, but they did bolster the number and they gave the appearance of a healthy recovery. This week, retailers have been posting decent results. Unfortunately, the guidance has been very weak. Consumers are tightening their belts and they are only spending money on necessities. This trend was confirmed by Procter & Gamble and Colgate when they said shoppers are “trading down” to off brand products.

Last week, Cisco CEO John Chambers did a 180. All year, he has been steadfast in his belief that a full-blown recovery was underway. Now, conditions have changed quickly and “he has never had this much difficulty forecasting business conditions”. This swift deterioration is similar to what we saw in the Philly Fed number this morning.

Private sector jobs grew more than expected in July, but I believe that was a onetime event. Corporations are not going to add to the overhead expenses during times of uncertainty. They have had to make tough decisions and let good people go. Until they see sustained demand, they will not add to payrolls.

Public-sector jobs fell more than expected in July. That trend will continue as state and local governments try desperately to balance budgets. A recent report suggested that 500,000 jobs could be cut from local governments in the next two years. States are preparing budgets for 2011 and they are running deep in the red ($84 billion next year). Their projections are always optimistic and we can expect huge deficits. According to the Constitution, states cannot incur deficits. This problem will have to be addressed immediately since states are already $300 billion in the hole. The bottom line is that public-sector jobs will fall dramatically.

This morning, the CBO (Congressional Budget Office) said that the deficit for 2010 will be $1.35 trillion or 9.9% of GDP. That is the highest level in 65 years. Next year, they are projecting a $1 trillion deficit. Imagine what the deficit will be when Obama-care kicks in for 30 million Americans. Oops, I forgot it is a self-funding program.

As I said in May, that would be peak employment this year and it would mark the high before we slip into a double dip recession. Employment conditions are deteriorating quickly and the credit crisis will resurface as more people lose jobs.

The @#$% will hit the fan in two weeks. China will release its PMI on September 30th and it will fall below 50 indicating economic contraction. That will get the bearish ball rolling during a massive week of economic releases. ISM manufacturing and ISM services will both decline and they have been weakening for months. The ADP employment index will show a decline in private sector jobs. That will set us up for a horrible Unemployment Report just ahead of Labor Day weekend.

All of this news coincides with the weakest seasonal period for the market. I am expecting the lows from June to be tested and I believe they will fail. The wild card in all of this is the European credit crisis. Bond auctions have recently gone well and I don’t believe these concerns will flare up this fall. That means we will have a contained decline and it will set up a year-end rally.

Strong corporate balance sheets, good earnings, low interest rates and Republican election victories will set up a small year-end rally. In the first quarter of 2011, we have a chance for a major decline.

The market does not always cooperate and longer term forecasts are often revised. However, I believe I am spot on with a sell-off in September and October. Start buying October out of the money puts. I have been suggesting this for weeks. 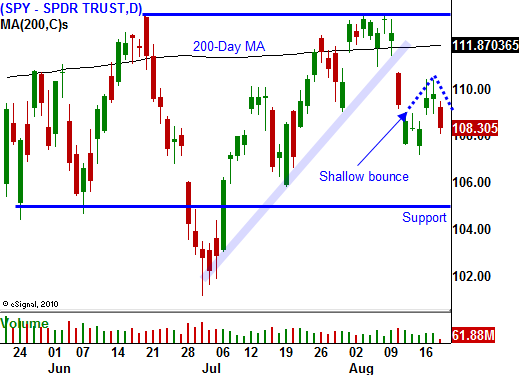