Finish Buying Puts Today and Tomorrow – The Decline Is Near!

Yesterday, the market started the week off on a negative note. A huge drop in the Philly Fed last week and three consecutive increases in initial jobless claims spooked traders.

This morning, Ireland’s stock market was down 5%. I mentioned yesterday that Greek bond yields jumped last Friday and Euro credit concerns are resurfacing. Overseas markets were generally weak and that set us up for a lower open.

Shortly after trading began, existing home sales were released. They dropped 27% in July to a new 15-year low. The S&P 500 dropped 10 points after the news, but it quickly regained those losses. The bad news was already baked in and traders knew that the number would be weak since first-time home buyer credits were halted in April.

Fear and pessimism are clawing their way back into the market. Consumer sentiment has been declining and that is weighing on spending. Retailers and consumer goods producers are reporting serious belt-tightening. More than 70% of our GDP is dependent on spending and this trend will weigh on Friday’s release. Analysts are expecting Q2 GDP to drop from 2.4% down to 1.4%. The Fed also lowered its forecast for 2010 GDP a month ago.

Durable goods orders will be released tomorrow and the consensus estimate is .5%. After two consecutive declines, we might see a slight rebound. This is a very volatile number and traders tend to take it with a grain of salt.

Initial jobless claims will be released on Thursday. A fourth bad number in a row will guarantee a weak Unemployment Report on September 3rd.

I am expecting major fireworks when we come in Monday morning. China’s PMI will weigh heavily on the market and you need to be in your put positions ahead of this weekend. I have been encouraging you to accumulate put positions during the last two weeks and you should be close to a “full boat”.

The SPY is drifting down to major support at $105 with ease. If this level fails, major selling will ensue. The news today was not unexpected and I feel the selling will be relatively contained. Earnings were the one bright spot and now that catalyst is gone. In fact, the remaining companies have been giving weak guidance. M&A activity has also provided some support, but the negative news is taking its toll.

Put the finishing touches on your bearish positions today and tomorrow. This could be one of the best movies of the year.

I will be hosting a Live Webinar Wednesday night and the price has been reduced 50%. I will conduct extensive market analysis and there will be two new option trades. Sign up.
.
. 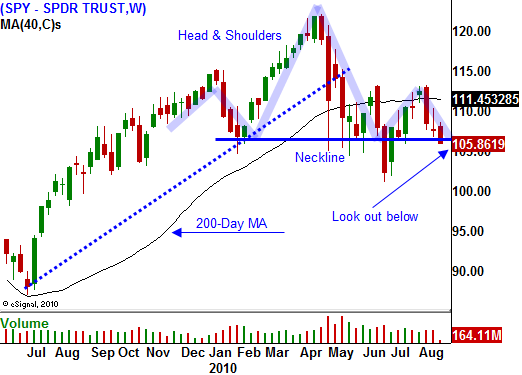