Finish Buying Puts Today – Get Ready For The Storm!

I mentioned two weeks ago that the market would struggle when earnings releases started to wane. The focal point was about to shift to economic news and I suspected conditions could get ugly.

This morning, new home sales fell to their lowest pace on record. They dropped 12.4% to 276,000 units. Existing homes are selling for less than the cost of construction and builders can’t rub tow nickels together until inventories are reduced. Yesterday, existing home sales also fell to a record low. Housing is critical to our economy and 50% of our employment growth was tied to this sector from 2001 to 2005. Think about the significance of that statistic.

Durable goods orders had fallen the prior two months and analysts were expecting an increase .5%. Orders rose .2%, but if you strip out transportation, it declined 3.8%. Most importantly, if you strip out the aircraft and non-defense orders, durable goods fell 8% last month. This is often used as a proxy to gauge business spending and the implications are bleak.

Tomorrow, initial jobless claims will be released. Unemployment is a major concern and this number has jumped dramatically in the last three weeks. I believe last month’s pop in private sector employment was a fluke. Corporations are not adding to payrolls during these uncertain times. Public-sector jobs continue to decline as state and local governments fight to balance budgets. Analysts are projecting 485,000 new claims. If we come near that number, the Unemployment Report will be horrible next week. Surprisingly, the consensus estimate calls for a drop of 120,000 jobs. I believe the chance for a downside surprise is great.

Friday, Q2 GDP will be released. This is the first revision and analysts expect it to drop from 2.4% down to 1.4%. Inventories have been rebuilt and consumer confidence is low. More than 70% of our GDP comes from spending and retailers have lowered their guidance. The Fed has lowered their GDP forecast for 2010 and although the decrease is priced in, the actual release could still have a negative psychological effect.

Economic news will push the market below key support at SPY 105. The wild card in all of this is the Euro credit crisis. Yesterday, Ireland’s market tanked 5% and last week, Greek bond yields jumped. If this fear resurfaces, the market decline could be severe.

The window for scaling into put positions has almost closed. Next week, you will either own puts or you will be on the sidelines wishing you had some. Once the selling starts, it is difficult to jump in. Premiums explode, bid/ask spreads widen and emotions run high. It is like trying to find shelter in the middle of a storm.

We have easily come down to test support at SPY 105. That level held this morning, but it will be challenged again this afternoon. Ahead of a scary initial claims number, I believe traders will error on the side of caution and dump stocks into the close. If SPY 105 fails today, the selling pressure will mount heading into the weekend.

I will be hosting a Live Webinar Tonight and I have reduced the price by 50%.

Sign-up and get extensive market analysis plus two option trades. 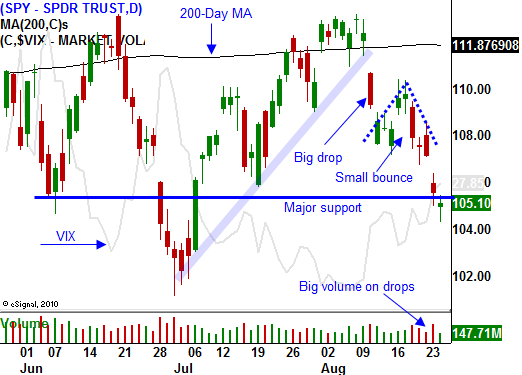