A Weak Unemployment Report Will Give You A Chance To Get Out of Bearish Positions – Take It!

Call a spade a spade, my forecast was wrong. Economic conditions are continuing to deteriorate, but the market did not decline on the news.

For weeks, I have been getting short and the entry price on those puts was good. The positions were making decent money, but I felt the best had yet to come. Yesterday’s rally stripped away those profits, but at least my losses were contained. I was confident in my forecast and my positions were large.

China’s PMI did not drop below 50, but it did come in below expectations at 51.7 (52 was the consensus estimate). Asia loved the news and overseas markets rallied. This was not a fantastic number. After declining for months, the PMI blipped higher.

Australia’s GDP grew 1.2%, hardly anything to write home about, but the market loved the number.

Across the pond, the PMI in Europe hit a six-month low dropping to 55.1 from 56.7 in July. Growth slowed in Germany, but traders focused on employment. Germany added a “whopping” 17,000 jobs in August. England’s PMI dropped to its lowest level in 13 months, but traders ignored the news.

The market was poised to rally before the open and the S&P 500 was up 11 points. An hour before the open, the ADP employment index was released. Analysts were expecting private sector employment growth of 14,000. The job market actually lost 10,000 jobs as companies laid off workers. This was a substantial miss and traders were counting on private sector job growth after July’s strong showing. The S&P 500 dipped two points just after the release and immediately rebounded. The market completely brushed off the number and the stage was set for a big rally.

Stocks surged higher on the opening bell and 30 minutes later, ISM manufacturing was released. It rose to 56.3 when estimates were 52.9 (this number is completely contrary to the Philly Fed, Empire Index, wholesale inventories and the Chicago PMI and I believe it will be revised lower next month). This was all the fuel the market needed to run higher.

This morning, initial jobless claims fell by 6,000 and that was 3,000 better-than-expected. Even though it exceeded expectations, 472,000 new claims were filed. We have had a month’s worth of dismal initial jobless claims numbers and tomorrow’s Unemployment Report is likely to disappoint. If the ADP report was correct and the private sector shed jobs, we could lose 200,000 jobs. Analysts are expecting a loss of 120,000 jobs and that includes 44,000 new jobs in the private sector.

From a bearish perspective, yesterday’s massive rally on mediocre economic activity was damaging. Even if jobs decline dramatically tomorrow, the market might not sell off.

We are stuck in a trading range and the market has traded from SPY 105 – 115 for the last year. Bears point to astronomical debt levels and deteriorating economic conditions while bulls argue that stocks are undervalued. The market is entering a seasonally weak period, but interest rates are so low that money is starting to shift into equities.

This week has forced me to temper my bearish outlook and to adjust my trading. I no longer feel that we will see a substantial decline. If we do, it will be very fast and furious with an immediate snap back rally. Companies are flush with cash and they are running lean and mean. They are buying back shares and engaging in M&A. Not many people want to lend the government money for 10 years at 2 1/2%. That means stocks represent an attractive value and Asset Managers will start nibbling to get a jump on a year-end rally. In a month, investors are likely to ease into stocks on the notion that Republicans will win elections in November.

Before I start sounding bullish, let me show you the other side of that coin. Economic conditions will continue to deteriorate and consumption will decline. Quantitative easing will initially please the market, but it won’t stimulate the economy. Interest rates are already at historic lows and people are not spending because they are tapped out. Our national debt will continue to spiral out of control and states will be scrambling to cut expenses. As the unemployment rate climbs higher, Democrats are likely to postpone tax increases ahead of elections. The news will continue to weigh on the market, but there will always be a “life-saver” to keep it afloat.

The tug-of-war we are currently seeing will continue. If we do not get a big decline in the next six weeks, we will not see a big year-end rally either. There is considerable resistance at SPY 115 and I believe it will hold.

Europe and the US are on the ropes, it is just a matter of time until we reach a breaking point. That could come in a matter of months or it might take a year or two. Don’t look for a big decline unless China’s economy slows dramatically or we have an actual sovereign failure.

Tomorrow, I am expecting a negative reaction to the Unemployment Report. Yesterday’s rally tells me that there is an underlying bid to the market at this level. I’m sure other bears see the same thing and I believe they will unwind positions (sell their puts) on weakness. That action is like buying the dip and it means the decline will be rather brief.

I am shifting to credit spreading strategies. I am not having any difficulty finding value in this market and there are many stocks with relative strength. On tomorrow’s decline, I will exit the rest of my bearish positions and I am likely to sell some put credit spreads if support is established. 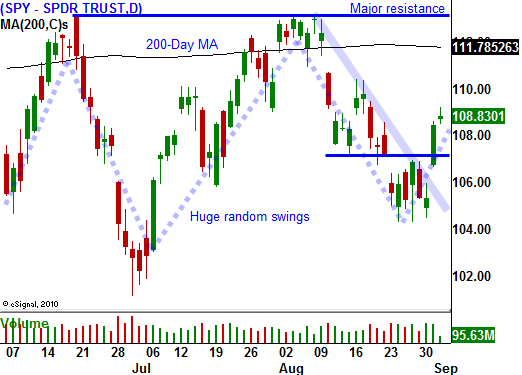