Not Horrible – Is Good. Assets Are Rotating Out of Bonds and Into Stocks.

Yesterday, the market chopped around for most of the day after a huge run-up Wednesday. That was an encouraging sign for bulls. By late afternoon, the market rallied and it closed on its highs. Earlier in the day, initial jobless claims came in slightly better-than-expected and optimism ahead of the Unemployment Report surfaced.

Even though 472,000 jobless claims were filed, traders were relieved that new claims have stopped rising. In recent weeks, initial jobless claims have spiked higher and that trend has stalled. Even if 200,000 jobs had been lost in August, I doubt the market would have sold off. The underlying bid to the market is strong and traders are ignoring dismal economic news.

This morning, the Unemployment Report came in better than expected. Consensus estimates called for a loss of 120,000 jobs and only 54,000 jobs were lost. The private sector added 67,000 jobs which is better than the 44,000 analysts projected. This is surprising since ADP showed a decline in private sector employment just two days ago. Furthermore, the unemployment numbers in June and July were revised in favor of the bulls. Fears of a double dip recession have vanished in a matter of days.

The economic news has not been strong, but it doesn’t have to be. Stocks are attractively valued and money is starting to rotate out of bonds. As long as the economic news is not horrible, investors are willing to buy stocks.

There are so many inconsistencies within the numbers that I’m starting to understand why Cisco’s CEO said that this is the toughest environment he’s ever had to predict. Last month, the Unemployment Report had major downward revisions to prior months (showing lower employment) and now those revisions were revised higher. A week ago, the Philly Fed came in at -7.7 when +7.5 was expected. That decline should have translated into a dismal ISM manufacturing number but it did not. The Unemployment Report showed that 67,000 jobs were added to the service sector, but the ISM services number that was just released fell dramatically. There are many other examples of inconsistency. The bottom line is that stocks are attractive as long as economic conditions don’t fall off a cliff.

It’s curious that the market rocketed on a better than expected ISM manufacturing number Wednesday, but it did not tank on a really bad ISM services number today. The service sector accounts for 80% of employment.

Traders might be jumping the gun ahead of the November elections. Republicans are expected to win many races and that would be bullish for the market. Asset Managers have been calling for a year-end rally and they might also be getting more aggressive now that major support held.

The market has jumped dramatically this week. Trading should be relatively quiet the rest of the day. Next week, the news will be light and the market is likely to drift higher.

As I look at all the numbers this week, they were not strong. I still believe economic conditions will deteriorate steadily, but that does not mean the market will sell off. Stocks are cheap relative to bonds and that will keep a bid under this market. September is typically a very weak month and there will be pullbacks. I suggest selling out of the money put credit spreads on these pull backs.

The market has rallied almost 5% in the last three days and I am not getting long ahead of the weekend. I’ve been bearish and it has been a tough week. I don’t want to add to the problem by prematurely entering bullish positions. I will reevaluate next week.

Tech and energy are two of my favorite sectors where I see value.

Have a great holiday! 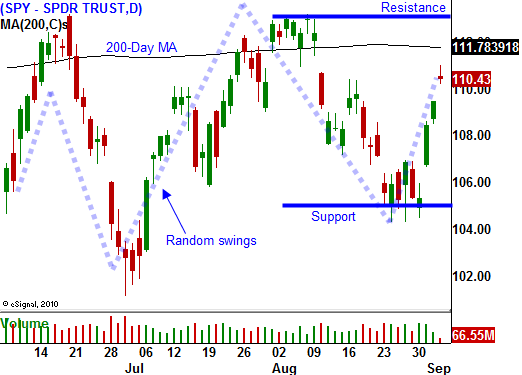