The News Last Week Was Dismal. Don’t Expect A Breakout Above SPY 115.

Last week, the market staged a huge rally on strong volume. It all started Wednesday when China’s PMI came out slightly better than expected.

The index rose to 51.6 and that was better than the prior month’s reading. However, it was worse than expectations. China’s economy has gradually been weakening in recent months. The government has imposed higher reserve requirements and it is trying to contain speculation. This morning, China ordered steel factories to stop production for 20 days. Demand is slowing and they do not want to be caught with stockpiles of inventory. The entire world is counting on China to pull us out but this recession and any slowdown will weigh on markets around the globe.

Before the open last Wednesday, the ADP employment index was released. Analysts were projecting 13,000 new jobs and the private sector actually lost 10,000 jobs. The market discounted this number and it rallied after the release. The big surge higher came when ISM manufacturing jumped to 56.3 when estimates were 52.9. Manufacturing only accounts for 20% of our jobs and the reaction was rather shocking.

The economic news was not good, but it wasn’t horrible. Bearish sentiment was too high and dismal news was already priced in. The rally continued Thursday and Friday even though the news was weak.

Initial jobless claims came in at 472,000. That is high relative to the numbers we were getting back in May and June. By no means has employment improved. The number was slightly better than what we’ve seen in recent weeks and that is all the market needed to rally. Friday, the Unemployment Report showed a loss of 54,000 jobs when analysts expected 120,000 jobs to be lost. Completely contrary to the ADP employment index, private sector jobs grew by 67,000. Again, it is important to remember that jobs were lost.

Perhaps the biggest surprise came after the open last Friday. ISM services fell dramatically to 51.5 and consensus estimates were 53.0. This number is much more important than ISM manufacturing because 80% of our jobs are tied to the service sector. The market actually moved higher after the release. As an important side note, I recently read a report that showed that the quality of jobs added in the service sector is poor. Our economy does not need more waitresses and checkout clerks; it needs bankers, lawyers and accountants.

Here’s the take away from last week’s action. Conditions could deteriorate rapidly, but until we actually have a sovereign failure or a big decline in China’s economic activity, there will not be a sustained decline. There are too many other factors that will prop this market up and it will take an actual event to push it lower.

Asset Managers are bidding for stocks. Corporate balance sheets are strong, earnings are excellent and miniscule bond yields present a poor investment alternative. The Fed stands prepared to intervene should conditions deteriorate and that is backstopping Asset Managers. Investors are also looking towards November elections. Polls suggest that Republicans will win races and that is bullish for the market. Money Managers also know that a year-end rally is possible and they want to get an early jump.

Investors are on the sidelines and cash flows have overwhelmingly favored fixed income. Should conditions improve (and I don’t believe they will), we could see a large rotation out of bonds and into stocks. That potential will also keep short-sellers at bay.

It is important to remember that the news last week was not good. Conditions will continue to gradually deteriorate. Without a big market sell-off, we won’t see a huge year-end rally and we are likely to chop back and forth from SPY 105 – 115. That is a difficult trading environment and it favors credit spreading. In a matter of days we have gone from the bottom of the trading range to the top of the trading range. When the momentum slows, I will start selling out of the money call credit spreads. Financials and consumer cyclicals are my favorite areas. If we get a major decline, I will start selling out of the money put credit spreads on tech stocks.

This morning, credit concerns in Europe are surfacing. These pullbacks will continue to haunt the market, but the impact will be temporary. As I mentioned earlier, we need an actual failure to rattle investors.

We are in a seasonally weak period and I believe overhead resistance will start to kick in. The news was not good enough last week to push us through resistance. Watch for choppy trading and a drift back into the middle of the trading range. With the exception of a small breakout, the market has traded between SPY 105 – 115 for the last year. I expect that range to hold. 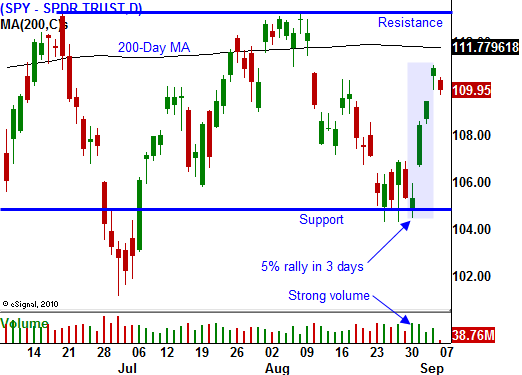