The market is losing some of its momentum as it bumps up against horizontal resistance at SPY 113, but it continues to creep higher. The good news for bulls is that it has been able to maintain the 200-day moving average for a few days. Prices have typically opened lower and rallied throughout the day and that is also bullish.

Weak economic releases have been “well received”. This morning, initial jobless claims came in at 450,000. That was slightly better than last week’s number. Many analysts suspected that it could come in much worse since last week’s numbers were estimated by 10 states due to the holiday. PPI came in at .4%, its highest level in five months. That should calm fears that we are heading into a deflationary environment. A little inflation is as the lesser of two evils and if contained, it is bullish. The Philly Fed came in at -.7 this morning when consensus estimates were 2.0. Manufacturing in the Northeast has been weak and this number is consistent with yesterday’s weak Empire Manufacturing number.

As long as the news is not horrible, the market is content. The economy is losing jobs, inflation is creeping higher and manufacturing is declining now that inventories have been rebuilt.

This morning, FedEx reported results. Its international business is strong, but domestic ground shipping has been weak. They plan to close 100 facilities and lay-off 1700 workers. This week, steel producers (Nucor and Steel Dynamics) lowered forecasts. That news came after Walter Industries and Cleveland-Cliffs reported lower prices for metallurgical coal. Two weeks ago, China halted steel production for 20 days fearing an inventory buildup. Collectively, this news might signal economic weakness ahead.

These releases should collectively weigh on the market, but they are not. Stocks are cheap relative to bonds and assets are rotating out of fixed income securities and into equities. Many stocks offer a dividend yield that is comparable to the US 10-year bond yield and investors also have the opportunity to make money if the stock moves higher. Asset Managers want to get long ahead of the November elections. They are waiting for a pullback so that they can buy stocks. The longer the market holds this level, the more aggressively they will bid for stocks.

If everyone is waiting for a pullback, it might never come. I believe that any decline will be relatively shallow and brief. Asset Managers also want to buy ahead of a year-end rally. The next week and a half will take one of two paths. If the market does not back off, look for a breakout above horizontal resistance at SPY 113 and a potential test of major resistance at 115. If the market does pull back, watch for support and a snapback rally through resistance.

Tomorrow, we will get CPI and consumer sentiment. I’m not expecting either number to drive the market. Next week, the FOMC will release its statement. They will cite gradually deteriorating conditions and they will restate their commitment to do whatever it takes to avoid a double dip recession. Government stimulus and the potential for another round of quantitative easing is also giving investors confidence.

Durable goods orders will be released next Friday. This is a very volatile number and it was relatively weak last month. If you stripped out transportation, it was down 3%. This release is taken with a grain of salt and I don’t see it as a potential spoiler for this rally.

In short, the news is rather light and momentum should carry the market higher. Wait for a pullback and buy calls when support is established. If the market does not pull back and it closes above SPY 113, buy calls.

Before it sounds like I am overwhelmingly bullish, let me qualify my forecast. I believe that we will see a nice rally from now until November elections. That timeframe will also take us through the first few weeks of earnings. This is a trading opportunity and I am still long-term bearish. Massive debt levels will eventually lead to a credit crisis. I realize that this fear could resurface at any moment and the rug could get pulled out from under me at any time. Consequently, I am buying calls to limit my risk and I am keeping my positions relatively small.

The market has tested the downside this morning and it is likely to rally late in the day. 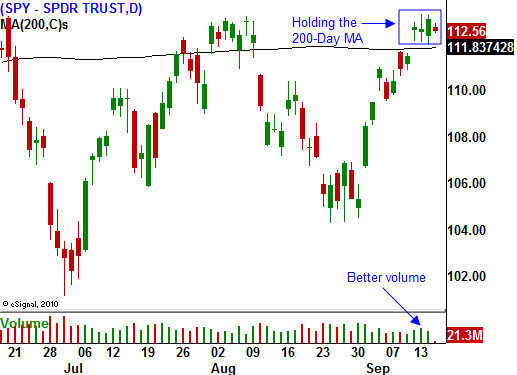