On the first day of September, the market surged higher from a major support level and it has gained 7% in a short period of time. The momentum has started to slow, but prices are gradually moving higher. The market has been able to rise above the 200-day moving average and now it is challenging a three-month horizontal resistance level at SPY 113.

Asset Managers want to buy ahead of November elections and they do not want to miss a year-end rally. They will get more and more anxious each day that the market holds its 200-day moving average. Everyone is hoping for a dip, but it might never come. Bids will gradually become more aggressive and the market will stage a breakout that should push it through major horizontal resistance at SPY 115.

Bond yields are at historic lows and assets will rotate out of fixed income and into equities. Earnings season will start in a few weeks and the price action ahead of the releases has been bullish the last four quarters. The market has been able to ignore negative news, demonstrating that the demand for stocks is strong.

This morning, CPI was released and it was benign. Inflation at the consumer level is not a threat. Consumer sentiment will be released shortly and it is likely to come in weak. The market is already prepared for that and I doubt the dismal news will have much of an impact on trading. Any surprise would be to the upside.

The news next week is rather light. The major economic releases are initial claims and durable goods orders. Jobless claims have improved two straight weeks and a number less than 450,000 would be well received. Durable goods orders are very volatile and this number tends to be taken with a grain of salt. If you strip out aircraft and defense from last month’s number, durable goods orders fell 8%. The market did not have a negative reaction to the number and I don’t see this release as a spoiler for the current rally.

The FOMC will also meet and their statement should not produce any major fireworks. They see gradually deteriorating economic conditions and they will do everything necessary to avoid a double dip recession. Their actions (if taken) won’t yield much in the way of results, but the market takes comfort knowing that this backstop is in place.

Our president will conduct a town hall meeting next Monday to discuss the economy. His recent speeches have been “campaign like” and he is trying to restore confidence ahead of the November elections. This event should be orderly.

The path of least resistance is up. As long as the market is not blindsided by horrible news, it will grind higher. I hate getting long near a resistance level particularly when the market has run up 7% in a very short amount of time. Wait to see if we get a pullback in the next few days. If we do, look for support and buy calls. Asset Managers are looking for a buying opportunity and any pullback is likely to be brief and fairly shallow. If we do not get a pullback, buy calls it the SPY closes above 113.

It is quadruple witching and the price action will be fairly volatile today. We have seen early selling and late day strength this week and I expect that pattern to continue today. I like tech and medical device manufacturers at these levels. 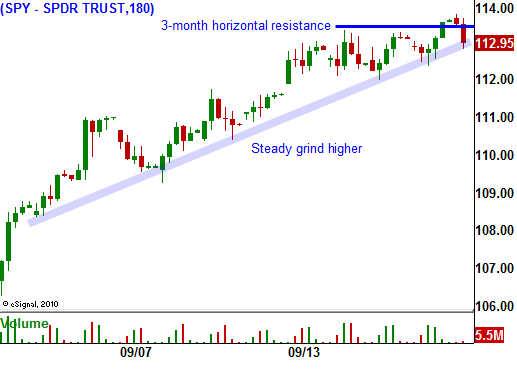